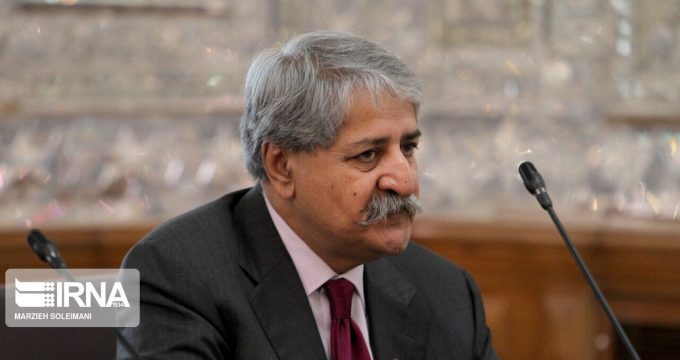 Ambassador says Pakistan not supporting US illegal sanctions against Iran

IRNA – The head of the Pakistan-Iran Parliamentary Friendship Group said Islamabad has never and will not support Washington against illegal sanctions imposed on Iran because these sanctions not only harm Iran but are also detrimental for Pakistan and the region.

Syed Naveed Qamar said in an exclusive interview with IRNA on Sunday that Pakistan wants to end the US unilateral sanctions against the Islamic Republic of Iran as soon as possible.

The head of Pakistan-Iran Parliamentary Friendship Group also noted that Islamabad will spare no effort to ease tensions between Iran and Saudi Arabia and bring the two countries closer together and will continue its efforts.

Naveed Qamar reiterated Islamabad’s recent efforts to mediate recent tensions between Iran and Saudi Arabia and Pakistani Prime Minister Imran Khan’s recent visit to Iran, and underscored that the most important and fundamental issue to be addressed is that Pakistan is a Muslim country consisting both Shias and Sunnis, which has ties to other Middle Eastern countries, including Saudi Arabia, in addition to its historical ties and longstanding cultural ties with the Islamic Republic of Iran.

He added that if the countries of the region, especially Pakistan’s Muslim neighbors, grapple with tension, it is not for the benefit of Pakistan but also causes problems for Islamabad.

The head of Pakistani parliamentary group further noted that Pakistan’s efforts to play the third role between Iran and Saudi Arabia had also existed in the former governments, but had never been publicly raised to the extent we witness in recent months.

In this regard, Pakistani Prime Minister Imran Khan traveled to Iran and met with senior officials of the Islamic Republic of Iran, as well as Saudi Arabia, and consulted with both countries, but the results of these consultations were not publicly raised and only a certain group at the upper level is aware of the details of the results of these meetings. So we cannot say for sure about the extent of progress in this area, but what can definitely be said is that the Islamabad government is trying to reduce the tension between Iran and Saudi Arabia and bring the two countries closer together and will continue its efforts.

On the measures taken by Iran and Pakistan to increase the volume of trade between Tehran and Islamabad, Syed Naveed Qamar made the remark that one of the important goals pursued by the Iran-Pakistan Parliamentary Friendship Group is also the realization of this important goal, but that it is important to mention that the volume of trade exchanges between Iran and Pakistan is more than the statistics announced by the officials of the two countries because the trade that took place between the two countries is through smugglers or through illegal entry and here the profit the smugglers are benefiting of the business are more than the benefit Iran and Pakistan are gaining.

But one thing that cannot be ignored is the Iranian and Pakistani people’s need for goods that are legally or illegally imported into the two countries, he said.

Therefore, it is imperative that the two governments of Iran and Pakistan take fundamental steps to meet the needs of the people and make every effort to do so, as otherwise, the illegal means would overtake trade with the legal methods.

But another issue to be noted here is the modernization of the infrastructure needed to expand the volume of trade relations as well as increase coordination between the parties, the head of Pakistani parliamentary group said.

After all, he said, it is time to put an end to all tariffs and rational obstructions of the amount of tax on imported and exported goods. For example, if the tariff rate on rice exported from Pakistan to Iran is not substantially reduced, in addition to the adverse effect on trade relations and the decline in exports, smugglers, and opportunists will take advantage of this opportunity to engage in sales through illegal means.

Navid Qamar also pointed to the long land borders between Iran and Pakistan and emphasized the economical and inexpensive transfer of goods by land instead of air and maritime routes, saying that it is necessary for both countries to provide adequate infrastructure to increase business relationships by making good use of this capacity.