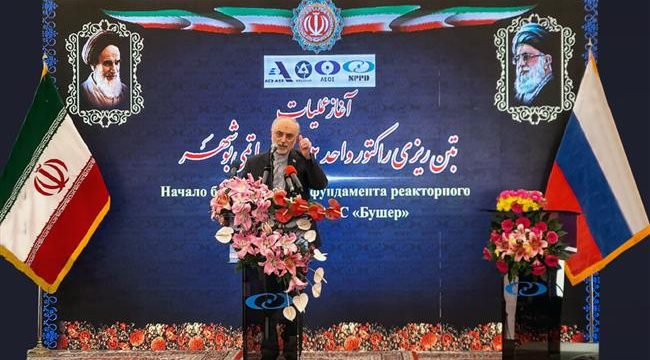 Press TV – The head of the Atomic Energy Organization of Iran (AEOI) Ali Akbar Salehi says the Islamic Republic is ready to exchange with the Persian Gulf countries its experience with regard to developing nuclear technology and cooperate with them.

Iran’s nuclear chief made the remarks on Sunday while addressing a ceremony held in the southern port city of Bushehr to start construction of the second and third reactors of the Bushehr Nuclear Power Plant.

Noting that one of the main issues facing the Persian Gulf states in their efforts to build nuclear power plants is local contractors, Salehi said, “With regard to the Persian Gulf littoral states, which have adopted a new approach to the use of nuclear technology, the Islamic Republic of Iran is ready for scientific cooperation and transfer of experiences” to those countries.

He added that a great achievement of building the Bushehr plant is that it has become completely indigenized six years after its inauguration. so that Installation of equipment and devices is currently being conducted by Iranian experts.

A high-ranking official at the AEOI said in October that the country’s nuclear activities have been entirely indigenized and the Islamic Republic has become self-sufficient in designing and manufacturing different types of centrifuge machines.

“One-hundred percent of Iran’s nuclear industry activities have been indigenized and today, we are self-sufficient in designing and manufacturing various kinds of centrifuges,” Ali Asghar Zare’an, special assistant to the AEOI head, said.

Elsewhere in his speech, Salehi said that the second and third units of Bushehr plant will be inaugurated in the next six to eight years.

“The inauguration of the new units will avert the annual emission of more than 21 million tonnes of pollutant gas,” Salehi said, adding that in power plants operating on fossil fuel, 11 million barrels of crude oil are required to generate 1,000 megawatts of electricity per year, while the three units of the Bushehr plant are expected to cut out the annual consumption of 33 million barrels of crude oil, which makes them economically feasible.

“If the oil price is currently set at 60 dollars per barrel, 660 million dollars will be saved annually. This is while some 70 million dollars are spent per annum to buy fuel and devices for the Bushehr Nuclear Power Plant,” the AEOI chief said.

He noted that the construction of every power plant requires five billion dollars, saying, “The total revenue earned during the useful life of this power plant will amount to 660 billion dollars. As a result, the cost [of building the power plant] will be returned in a matter of six years and the remaining revenue will be added value.”

Meanwhile, Mahmoud Jafari, the contractor for the Bushehr Power Plant, told the Islamic Republic News Agency (IRNA) that the excavation operation for the second unit of the plant started three years ago, while eight percent of the construction work for the third unit has already been completed.

He added that the construction of the second and third units of the plant will be finished in a period of 10 years in line with nuclear safety standards.

Jafari noted that the Nuclear Power Production & Development Company of Iran and Russia’s Atomstroyexport signed a contract for the construction of the second and third units of Bushehr plant some five years ago.

“The agreement includes the designing, construction and inauguration of two units of nuclear reactors, each with a capacity to generate 1,057 megawatts of electric power,” the official added.

Russian Foreign Ministry spokeswoman Maria Zakharova in July affirmed her country’s resolve to keep up cooperation with Iran at the Bushehr plant, defying illegal US sanctions against the Islamic Republic.

She hailed the construction of the Bushehr plant as “the Russian flagship project in Iran” and noted that although US sanctions create hurdles for business ties with Iran, Russia “was not standing idle.”

In 2014, Russia signed a cooperation contract with Iran to help build the second and third Bushehr reactors, which are scheduled for launch in 2024 and 2026, respectively.