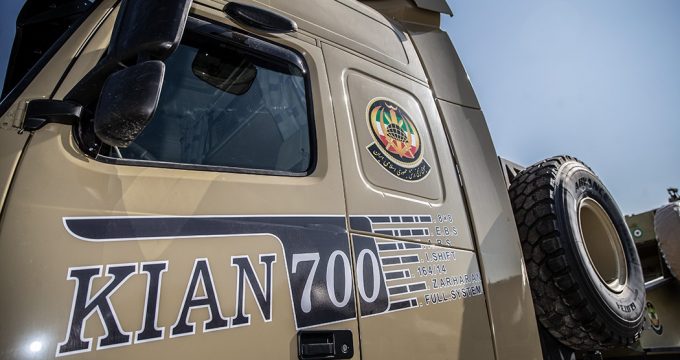 Major General Mohammad Baqeri, the Chairman of the Chiefs of Staff of the Iranian Armed Forces, the tank transporter was unveiled at an overhaul and refurbishment center of the Iranian Army’s Ground Forces on Saturday.

The vehicle enjoys an 800 horse-power engine which can pull up to 200 tonnes, effectively allowing it to carry two 60-tonne tanks on its “Suleiman-3” semi-trailer.

The tank transporter is a more advanced version of an earlier Iranian model, the “Kian 500”.

The top military commander added that by refurbishing and upgrading its equipment, Iran could have access to advanced weaponry at relatively lower costs while avoiding dependency on foreign imports.

Iran has taken great strides seeking to attain self-sufficiency in producing essential military equipment and systems in the face of decades-long sanctions and arms embargoes on the country.

The country consequently produces a wide variety of advanced weapons systems and equipment based on its own technological capabilities.

Also speaking at the ceremony was chief commander of Iran’s Army Major General Abdolrahim Mousavi, who said it was Iran’s indigenous Mersad air defense system which shot down an unidentified drone on Friday.

The drone was violating Iran’s airspace near the port city of Mahshahr in the southwestern province of Khuzestan on the Persian Gulf coast before being shot.

Iranian officials have said investigations are ongoing regarding the drone, its mission and its originating country.

Mousavi added that the drone, which had a low radar cross section making it difficult to detect, was flying at an extremely low altitude in order to avoid exposure.

The Iranian Army commander said that incident demonstrated the capabilities of the Mersad system.

The system can simultaneously engage two targets at a maximum range of 40 kilometers and an altitude of 18 kilometers.