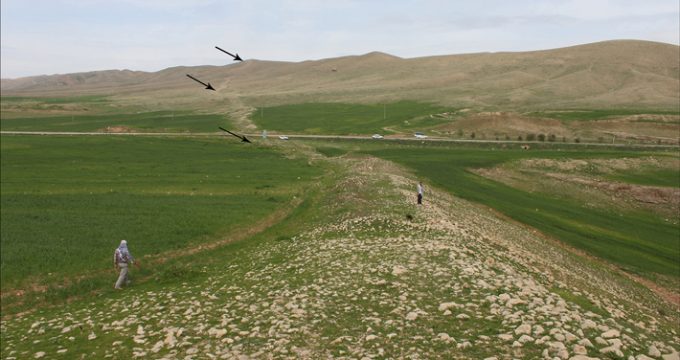 Archaeology – Live Science reports that traces of a poorly preserved stone wall stretching southward 71 miles from the Bamu Mountains has been identified in western Iran by a team of archaeologists led by Sajjad Alibaigi of Razi University.

Pottery found along the structure, known to locals as the “Gawri Wall,” has been dated to the fourth century B.C. to the sixth century A.D., Alibaigi explained.

The researchers also found evidence that there may have been turrets or buildings placed along the wall, which was made with local materials such as cobbles and boulders fixed with gypsum mortar. Alibaigi said archaeologists estimate the wall may have stood about 10 feet tall and 13 feet wide.

It may have been built as a border wall by the Parthians or the Sassanians, he added. Similar structures have been found in northern and northeastern Iran. Read the original scholarly article about this research in Antiquity. To read about the summer capital of an Islamic empire that stretched from Iran to India, go to “Minaret in the Mountains.”

Bamu Mountains, Cultural Heritage, Gawri Wall, Sajjad Alibaigi November 7, 2019
Iran has ‘military advantage over US and allies in Middle East’
Iran takes most significant step yet away from nuclear deal with world powers