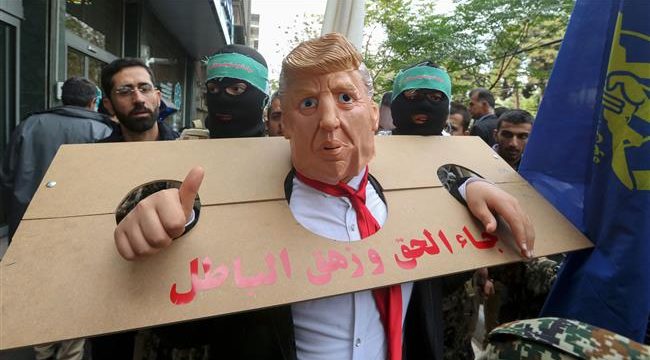 Press TV – Thousands of Iranian demonstrators have issued a statement at the end of rallies on the 40th anniversary of the former US embassy takeover, branding Washington “deceitful” and “mankind’s biggest enemy.”

Students on Monday joined people from all backgrounds to express their opposition to America’s policy of destabilizing other nations.

Thousands of demonstrators gathered outside the former US diplomatic mission and chanted slogans against both the United States and Israel.

The demonstration was dominated by a chorus of “Death to America” and “Death to Israel” chants by the people present at the venue.

Some of the protesters carried signs with Farsi inscriptions that stated “America on Decline” and “America will soon collapse.”

They also named the current Persian year as the year of America’s decline, referring to recent remarks by Leader of the Islamic Revolution Ayatollah Seyyed Ali Khamenei that the US is on “decline” in terms of power and clout.

Iranian rallygoers also took aim at the Al Saud family for waging a war against the people of Yemen, killing thousands of Yemenis and putting millions of them in the throes of famine since 2015.

US deceitful, enemy of mankind

The demonstrators wrapped up the nationwide event by issuing a statement that doubled down on Iran’s will to stand up to global arrogance.

The statement called the takeover of the embassy a “genius” and “revolutionary” move that needed to be discussed in universities and schools to familiarize the youths with America’s atrocities against Iran.

“We still view the declining and collapsing America as the number one enemy of the mankind,” the statement noted, adding both the US and its European allies are “untrustworthy.”

They also condemned the “child murdering” regime of Israel as well as the Al Saud regime for their attempts to sow division in the Islamic World.

The demonstrators further reiterated their support for the people of Palestine in the face of Israel’s ongoing occupation of their lands.

Finally, they supported the Houthi movement’s fight against Saudi Arabia’s deadly war and expressed solidarity with the people of Bahrain and Nigeria, in the struggle against their governments.

General Mousavi said the embassy takeover had been the symbol of Iran’s struggle against America’s plots since the Islamic Revolution.

“This is one of the main grassroots events in the history of the world’s genuine and popular revolutions,” he said, noting that the move prevented the US from overthrowing the Islamic establishment in Iran like it has done in 60 other countries through wars and coup d’etats.

“The enemies should know that sanctions, threats, hypocrisies and conspiracies will never make a dent in the Iranian nation’s will and this nation will never surrender to greediness and arrogance,” the general asserted.

Mohsen Rezaei, the secretary of Iran’s Expediency Discernment Council, also attended the event and told the media that Iranian officials should not “waste their time” by trying to negotiate with the US.

He was echoing Saturday’s remarks by Iran’s Leader, who said, “Nothing will come out of negotiation with the Americans, because they will certainly and definitely not make any concessions.”

General Mohammad Reza Yazdi, a top IRGC commander, also said at the event that the US was on the decline, adding it is wrong to think that negotiations with Washington would bear any fruit.