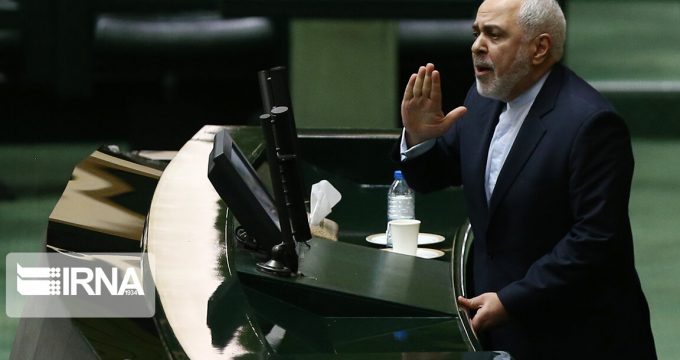 IRNA – Foreign Minister Mohammad Javad Zarif said on Sunday that the Islamic Republic and the Foreign Ministry have done their best to counter the Western efforts over money laundering.

Attending in the Parliament to reply to a question posed by an MP regarding his remarks on money laundering as much as 30 billion tomans in Iran and inaction in the face of three countries of France, Germany and the UK, he said that the Islamic Republic and the Ministry of Foreign Affairs have done their utmost to deal with Western measure on money laundering and are to continue their efforts.

Elsewhere in his remarks, the high ranking diplomat went on to say that what he was referring to in Doha meeting, was that the United States should not exploit the science of negotiation in the world, noting that the US is an outlawed country that no one in the world is ready to talk to; we have to introduce this vicious, hypocritical American face to the world, not let it pass us by and claim that we are ready to negotiate without any condition and that law-breaker will tell us that Iran is not in favor of negotiation; Iran is in favor of negotiation but talks must be based on international regulations.

The last round of talks we entered with the US was not because of our interests or trust to the them, Zarif said adding that if we had trusted them, we there was no need to write a 150-page agreement – they signed the same with North Korea.

The top diplomat noted that he went through tough negotiations and pressures and insults by the Americans to abolish the 6 Security Council resolution.