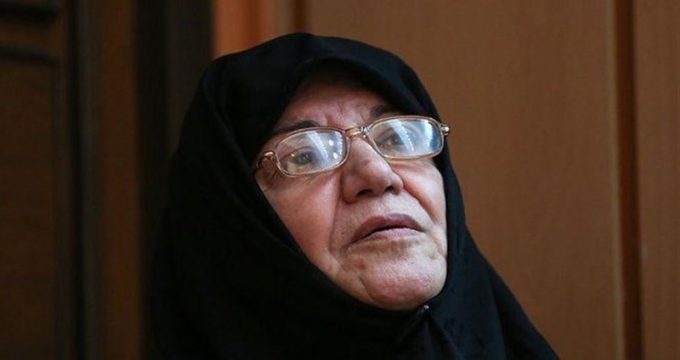 The New York Times | Arash Azizi: A dissident politician and women’s rights advocate, she sought repeatedly to be accepted as a presidential candidate but each time was denied.

Azam Taleghani, a dissident politician and women’s rights activist who repeatedly fought to become the first female presidential candidate in Iranian history and each time was denied, died on Wednesday in Tehran. She was 76.

Ms. Taleghani had been admitted to Pars Hospital with a brain disorder and died there, her brother Mohammadreza Taleghani said in a statement.

Ms. Taleghani was best known for her recurrent attempts to run for the presidency. In stipulating the qualifications for the office, the Islamic Republic of Iran’s constitution, though mostly written in Persian, uses an Arabic phrase that could be read as “men of politics.” She made it her mission to challenge this reading, asserting that it meant something closer to “political personalities” and that it could thus include women.

Ms. Taleghani, who had been elected to the first Parliament assembled after the Iranian Revolution in 1979, registered as a presidential candidate in 1997, 2001, 2005, 2009 and 2017. But each time, the Guardian Council, the body of clerics and jurists that decides who is qualified to run, threw out her candidacy.

She refused to give up. In her last attempt, at age 74, she had to be helped up the stairs of the Interior Ministry to register. “I will register to run for president for as long as I am alive,” she said.

It wasn’t just her gender that made Ms. Taleghani a thorn in the side of establishment. Espousing a progressive brand of revolutionary Islamism, she was a staunch ally of reformists and an inspiration to a generation of female politicians who tried to work within the narrow range of tolerated politics in the Islamic Republic.

“She was a militant woman who always stood with the people,” said Masoumeh Ebtekar, a current vice president who is best remembered in the United States as “Sister Mary,” the English-speaking spokeswoman for the Iranian students who took American diplomats hostage in 1979. (The American news media gave her the nickname because her head scarf resembled a nun’s habit.) She called Ms. Taleghani “a legend of resistance and devotion.”

Azam Taleghani was born in 1943 in Tehran to Ayatollah Mahmoud Taleghani, a politically active progressive cleric, and his second wife, Tooran Taleghani.

Unlike many Shiite clerics of his day, Ayatollah Taleghani had supported Mohammad Mossadeq, the democratically elected prime minister who was overthrown in an American-backed coup in 1953 that gave more power to the shah, Mohammad Reza Pahlavi, an American ally. In the years afterward, the ayatollah remained an opponent of the shah and was continually harassed and imprisoned.

At 16, Azam married Morteza Eghtesad, who would become a provincial governor after the 1979 revolution. But marriage did not mean a domestic life. Ayatollah Taleghani had insisted that his daughters be educated, and Azam emerged as his most politically engaged child. By the time she finished high school, she was a mother of two but also a political activist.

In 1961, Ayatollah Taleghani joined a group of mostly lay comrades of Mr. Mossadeq, who was under house arrest, to found a new organization, the Freedom Movement of Iran. Its most charismatic ideologue was the young activist Ali Shariati, whose eclectic brand of left-wing Islamism was opposed by most clerics but embraced by Ayatollah Taleghani. He gave a copy of Mr. Shariati’s magnum opus, “Islamology,” to his daughter Azam.

To the end of her life, Ms. Taleghani remained committed to this strain of Islamic politics. Her diverse influences included Persian translations of the Italian novelist Ignazio Silone’s 1930s anti-fascist work “Vino e pane” (“Bread and Wine”) and Alexandre Dumas’s “The Count of Monte Cristo.”

In 1972 she and her twin sisters, Tayebe and Tahere, founded the Alayi Foundation, which provided a middle school for girls in Tehran and became a hub for opponents of the shah, many of whom were given jobs teaching there.

Ms. Taleghani was studying Persian literature in Tehran’s teachers college in 1975 when she was arrested, in part because of her activities at the foundation. Convicted by a military court and given a life sentence, she was sent to the notorious Evin prison in Tehran. Two of her brothers suffered the same fate, all part of a pressure campaign by the shah against their father. The imprisonment of not just his sons but his daughter as well was considered a grave insult to him as a leading Shiite ayatollah.

Ms. Taleghani and hundreds of other political prisoners were released in late 1978 as a concession by the government in the face of the building revolutionary movement. But her time in prison had given her a new cause.

“It was in prison that I realized women don’t have their organizations, and that something ought to be done about this,” she said.

After the revolution, she was repeatedly stymied in her attempts to found women’s organizations. Although she had written the bylaws for what became the Islamic Women’s Institute of Iran in late 1978, it could not be established until 1983. Her efforts to found a political party for women took even longer: It was not until 1992 that her Society for Women of the Islamic Revolution was allowed to form.

Ms. Taleghani was nevertheless elected to the first post-revolutionary Parliament — one of only four women to gain seats — on a ticket made up of supporters of President Abolhassan Banisadr, an ally of the Freedom party. (Mr. Bansadr would be impeached and sacked in 1981.) Her candidacy was also supported by the communist Tudeh Party.

Starting in 1979, Ms. Taleghani edited Hagar’s Message, a newspaper named after the Egyptian wife of the prophet Abraham; Hagar was a symbol of the oppressed people of the world in Mr. Shariati’s book “Islamology.” The publication became a home for religiously inclined progressives until it was shut down in 2001.

Ms. Taleghani then focused her energies on the Islamic Women’s Institute, which was accredited by the United Nations as a nongovernmental organization providing education and training to single mothers and disabled women.

Ms. Taleghani’s husband died in 2017. She is survived by four children, her nine siblings, two half sisters and two half brothers.

As a new generation of secular Iranian feminists emerged in the late 1990s, they found a kindred spirit in Ms. Taleghani. Like her father, she opposed making it mandatory that Iranian women wear the head covering known as the hijab, even though she chose to wear the even more enveloping chador.

Still, her feminism had its limits. As part of an Iranian delegation to the United Nations World Conference on Human Rights in Vienna in 1993, she dismayed many there by her expressions of support for the Islamic Republic. “I am not a feminist,” she once said. “I support the rights of the oppressed, whether men or women. But currently women are more oppressed than men.”

In 2009, she showed courage by writing to the supreme leader Ayatollah Ali Khamenei to protest the crackdown on supporters of the reformist Green Movement. The letter was of little surprise to those who recalled her protesting the house arrest of a dissident cleric, Ayatollah Ali Montazeri, in 1997, or her one-woman sit-in outside Evin prison in 2003 to protest the suspicious death there of an Iranian-Canadian photojournalist, Zahra Kazemi.

A month ago, in her last major speech, Ms. Taleghani said, “From the beginning of the revolution we were told that those in power shouldn’t be criticized, but if we had been allowed to criticize, we wouldn’t have so much embezzlement, theft and betrayal.”