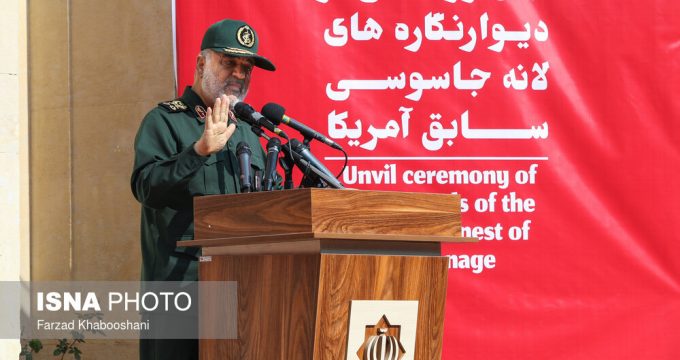 US roleplay in wars ends in massacre of 8.5mn individuals: IRGC chief

MNA – Chief Commander of Islamic Revolutionary Guards Corps (IRGC) Major General Hossein Salami said on Saturday that “some 8.5 million of deaths is the result of direct or indirect interference of the US in wars in the region and the Muslim world during the past 40 years.”

“The US is the major exporter of weaponry and the main party of different wars across the globe, while in American articles ensuring peace in the world is majorly discussed,” he said.

“US military power illustrates that it seeks nothing more than creating chances for destroying the earth,” he said, “While Americans speak of combating mass destruction weapons, their country is the first one who achieved atomic weapons and used them.”

Iranian General noted that while the US talks of fighting against terrorism and human right, President Trump admits that ISIL had been established under his predecessor President Obama.

“How can a country that plans coups in different world countries be the flag-carrier of democracy?” he asked.

“The US has sought meeting its interests in various parts of the world and has expanded its military power, accordingly,” he said, “[Now,] the US cannot develop its economic achievements across the globe since the balance between its budget and costs is disturbed.”

“The more costs the Americans pay, the less they gain,” General Salami added.

“In present conditions, the US pays the prices but the victory goes to its enemies,” he said.

“They have reached a level of powerlessness that despite having power they lack the tact to use it effectively. This means the decline of their power,” he noted.