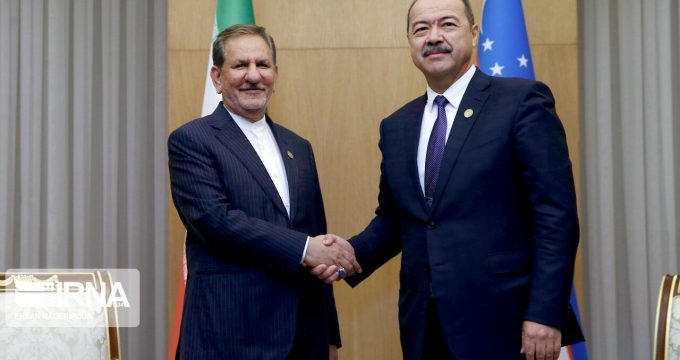 Tasnim – Iranian First Vice-President Eshaq Jahangiri highlighted the importance of the Shanghai Cooperation Organization (SCO) and said the Islamic Republic is interested in becoming a member of the international body.

Heading a high-ranking delegation, Jahangiri arrived in the Uzbek capital of Tashkent on Friday to take part in the 18th Meeting of the Council of Heads of Government of the Member States of the SCO.

Upon his arrival, he was welcomed by Uzbekistan’s Deputy Prime Minister Aziz Abdul Hakimov, the Uzbek deputy foreign minister, Tashkent mayor and the Iranian ambassador to Uzbekistan.

Speaking to reporters, Jahangiri said, “The SCO is one of the most important organizations formed in Asia and important countries such as Russia and China are among its members.”

He also said that the Islamic Republic of Iran is also interested in becoming a member of the Organization.

The Iranian first vice-president is planned to explain the Islamic Republic’s views and stances on the most important regional and international issues at the SCO meeting.

On the sidelines of the event, he will hold talks with senior foreign officials, including Uzbek Prime Minister Abdulla Aripov.

During his two–day visit to Uzbekistan, Jahangiri is also slated to visit historical sites of Samarkand.

The SCO Charter, formally establishing the organization, was signed in June 2002 and entered into force on 19 September 2003.

Iran, Afghanistan, Mongolia, and Belarus are observer states of the organization.