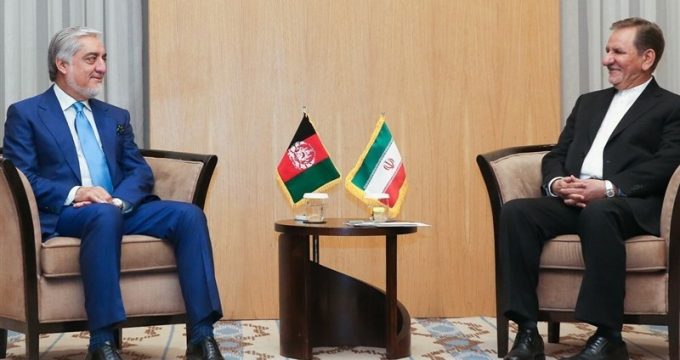 “Elections are one of the symbols of democracy,” Jahangiri said at a meeting with Afghanistan’s Chief Executive Abdullah Abdullah in the Uzbek capital of Tashkent on Friday on the sidelines of the 18th Meeting of the Council of Heads of Government of the Member States of the Shanghai Cooperation Organization (SCO).

“I hope we will witness the development process of the country after the announcement of the results of the Afghan presidential election and the establishment of a legitimate government elected by the people of the country,” he said.

“As in the past, the Islamic Republic of Iran will support the government elected by the Afghan people,” the first vice-president noted.

During the meeting, Abdullah also briefed Jahangiri on the process of Afghan presidential elections and said it is hoped that by the next two weeks, the preliminary results of the elections would be announced.

According to Afghanistan’s Independent Election Commission chair Hawa Alam Nuristani, the preliminary results from the presidential elections in September will not be released until November 14.

Afghans went to the polls for a first-round vote on September 28 and initial results were supposed to have been released by October 19.

A lengthy postponement is likely to stoke political uncertainty and allegations of fraud, according to media reports.

This year’s election is considered a two-horse race between Abdullah and President Ashraf Ghani.

The two squared off in 2014, with Ghani eventually named winner after a bitter campaign that was marred by violence and allegations of systemic fraud.