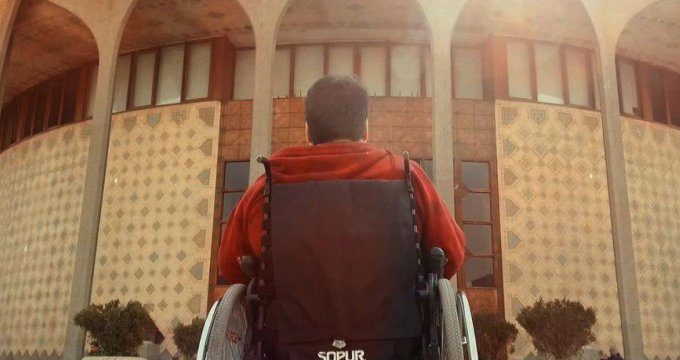 Tehran is home to 105,758 disabled people and much needs to be done to make the Iranian capital disabled-friendly. Urban managers have launched initiatives to attain this goal.

Tehran deputy mayor for transportation affairs, Mohsen Pourseyyed-Aqaei, in a directive called on urban managers to make the Iranian metropolis more convenient to persons with disabilities.

In a talk with Financial Tribune, Tehran City Council member Zahra Nejadbahram, an aide to Tehran mayor, Ali Asghar Eynolghozat, an aide to Tehran deputy mayor, Pourseyyed-Aqaei, and the head of the Campaign in Support of Disabled People, Behrouz Morovati, discussed the initiatives and their intended outcome.

A few years ago and following a push from Traffic Police, railings were installed in Tehran to prevent bikes from entering sidewalks. These railings have made the pavements inaccessible to many people with disabilities, especially wheelchair users.

As per the directive signed by Pourseyyed-Aqaei, urban mangers were tasked with removing these obstacles.

Furthermore, urban infrastructure is to be overhauled to make public transportation stations accessible to persons with disabilities.

Zahra Nejadbahram is an Iranian journalist, women’s rights activist and reformist politician who currently serves as a member of Tehran City Council.

She told Financial Tribune, “Tehran Municipality and the city council have implemented an inclusive approach toward all citizens. Our agenda of making ‘Tehran a City for All’ is in line with this approach. And persons with disabilities are no exemption.”

“Making Tehran more disabled-friendly used to be only words on paper. However, over the past two years, new efforts in this line have been initiated,” she added.

Nejadbahram is hopeful that the new directive would make real-life changes that could be experienced by all.

“The directive has come in response to a long-standing demand of thousands of disabled people living in Tehran. Much more needs to be done to make Tehran disabled-friendly,” she said.

The reformist urban manager believes that public spaces should be established with foresight to address the needs of all citizens.

“About 10% of each community are people with disabilities. The needs of these people must be acknowledged and addressed.”

According to her, an inclusive urban planning approach would provide persons with disabilities a chance to play a more proactive role in society.

“Facilitating these people’s participation in society is our responsibility,” she said.

Tehran is to mark the International Day of Disabled Persons on Dec. 3. The city councilor says, “We will try to ease disabled people’s access to 44 parks and at least two municipality buildings by Dec. 3. And hopefully, we’d be able to mark the international day by showcasing our latest achievements in the field.”

Tehran Municipality’s ICT Organization is set to launch a smartphone application that will include a map of disabled-friendly public places.

Nejadbahram concluded on a hopeful note by saying, “Other cities are highly likely to follow the example of Tehran and move toward becoming more disabled-friendly.”

According to government data, Iran has 3,171,518 disabled people.

Ali Asghar Eynolghozat is an aide to Tehran Mayor Pirouz Hanachi and highly motivated to making the metropolis disabled-friendly.

He is of the opinion that the recent initiative is the result of extensive deliberations at Tehran Municipality’s Office for Urban Development.

Eynolghozat believes that providing citizens with safe access to public spaces is TM’s responsibility. Although he acknowledges the hazards of bikers going on sidewalks, Eynolghozat said, “This should not lead to setting up barriers that would prevent disabled people from accessing the pavement.”

He, however, noted that the railings are to remain in place in areas like Tehran Grand Bazaar where vehicles are banned and bikers offering delivery services flout traffic rules and enter pavements.

According to Eynolghozat, in such areas, railings need to remain in place, but access points are to be constructed for wheelchair users.

“The same approach is to be implemented in other areas of Tehran. In other words, Tehran will become more disabled-accessible with methodical urban planning,” he added.

“Hopefully, by the spring of 2020, all subway stations in Tehran will be equipped with elevators,” he said.

According to Eynolghozat, from a total of 169 subway stations in Tehran, elevators need to be installed in 49 stations while others are already equipped.

Tehran Bus Rapid Transit services, officially inaugurated in 2008, are also being modified to facilitate the movement of disabled people. Ramps are being installed at BRT bus stations to ease access for wheelchair users.

Bridges will be set up on all open drains across the city. Tehran Municipality is set to use smart traffic signals that are designed to improve the flow of traffic to help pedestrians with visual or other disabilities safely cross streets, or even catch a bus.

Ali Pirhoseinlou is an aide to Tehran Deputy Mayor Mohsen Pourseyyed-Aqaei. He is an active Twitter user and promotes sustainable urban development through social media platforms.

Pirhoseinlou noted that making the capital disabled-friendly has been high on Tehran Municipality’s agenda over the past two years.

“Efforts have been on track in Tehran to boost access to bus and taxi stations with focus on the needs of disabled persons.”

While listing some of the efforts, including overhauling bus and taxi stations, the urbanist said, “There is much room for improvement.”

He pointed out that warning signs, or signs providing important information and written in Braille, have been installed at 36 bus stations. Furthermore, these locations have been made accessible to wheelchairs.

“Almost all taxi stations in Tehran now have ramps and entries that can be used by disabled people. Guide signs in Braille have also been installed in these places,” he added.

The urban official noted that shortcomings can be reported by dialing 137 and 1888 in Tehran.

Pirhoseinlou concluded by saying, “The implementation of these measures is essential for preserving citizens’ rights, which include offering decent public services to disabled people.”

Behrouz Morovati has spearheaded a public campaign that was launched three years ago to uphold the rights of disabled people in Iran.

He told Financial Tribune, “Over the past few years, we pushed time and again for making sidewalks accessible to disabled people since the fences set up to bar motorbike riders disrupted the disabled people’s daily commute.”

Morovati calls the recent directive “a major step in the right direction” and attributes its passing to “vigorous efforts spearheaded by Eynolghozat and Nejadbahram”.

According to the activist, the traffic police had always been concerned about bikers’ lawless behavior and strongly opposed the removal of fences. “However, Nejadbahram’s efforts and non-governmental organizations’ push helped end the deadlock.”

Morovati explained that many plans were previously shelved and were gathering dust, “however, Nejadbahram reignited hope for bringing about a meaningful change”.

While appreciating the measures introduced by Tehran Municipality, Morovati underscored the importance of strengthening ties among urban managers, local NGOs and activists.

“Direct communications between policymakers and disabled people or NGOs representing them would help boost the quality of services offered to these people,” he said.

He is also of the opinion that other cities are highly likely to follow the example of Tehran and implement similar measures, noting that some Iranian cities have already implemented disabled-friendly plans.

“For instance, Mashhad and Bushehr are offering free transportation services to disabled people,” he said.

There is much room for making Tehran more livable for the disabled. While municipal officials highlight efforts to ease the movement of disabled people across the city, other official entities need to address the economic, social, cultural and recreational challenges facing these people, which will also contribute to Tehran’s sustainable development. Time will show whether urban managers will walk the talk.