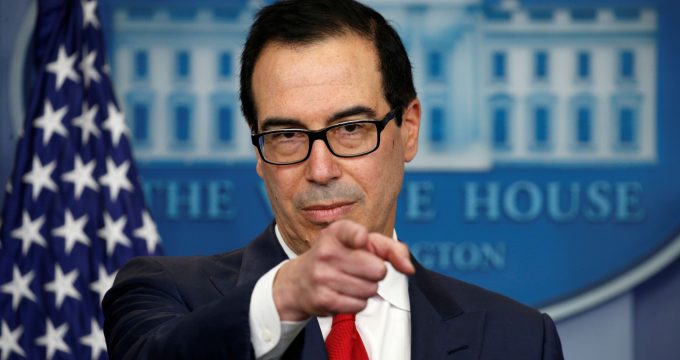 Mnuchin: US, allies working to offset loss of Iranian oil

Mnuchin spoke to reporters during a trip to India – which was one of the main importers of Iranian oil until New Delhi stopped the shipments this May in the aftermath of the U.S. sanctions.

“We are working with our allies to make sure that there is significant supply in the market of oil to offset sanctions,” said Mnuchin, who is on a regional tour to try to build up support against Iran.

“We are sensitive to the fact that India has tremendous energy needs. Therefore we look forward to work with India on LNG (liquefied natural gas) … we had productive discussions,” he added.

Companies in the United States see India as a key buyer of super cooled gas after exports to China were hit by Washington’s escalating trade dispute with Beijing.

Tensions have been rising between longtime foes Tehran and Washington since last year when U.S. President Donald Trump quit an international nuclear pact with Iran and imposed sanctions that had been lifted under the agreement.

India, which used to be Tehran’s top oil client after China, halted Iranian oil imports from May after Washington withdrew exemptions that had protected some buyers of Iranian crude.

India, the world’s third biggest oil consumer, had to scout for alternatives including increasing purchases from the United States to make up for the shortfall.

India’s finance minister Nirmala Sitharaman met Mnuchin and said she had told him about India’s role in developing Chabahar port in Iran. (Editing by Andrew Heavens)