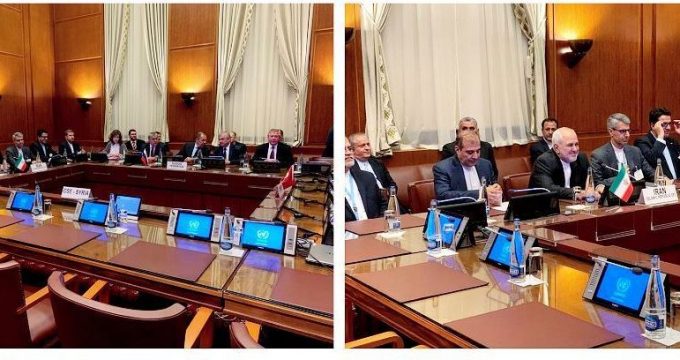 Zarif: Path of rule of law in Syria difficult but only solution

IRNA – Iranian Foreign Minister Mohammad Javad Zarif in a message referred to his tour to Geneva, saying the path to rule of law in Syria is difficult but is the only solution.

“Returned from Geneva where I met with Russian & Turkish FMs, & UN’s #GeirOPederson, on eve of the inauguration of Syria Constitutional Committee,” Zarif tweeted on Thursday.

He added: “After years of the devastating war, the path to rule of law begins— thanks to #Astana process.”

“Difficult road ahead, but no other alternative,” he noted.

Zarif arrived in Geneva late on Tuesday night to take part in the foreign ministerial meeting of Astana Process talks.

He wrapped up his two-day meeting in Geneva late on Wednesday and departed for Tehran.

The Iranian foreign minister sat down for talks with his Russian counterpart prior to the trilateral meeting with the Russian and Turkish counterparts.

During the meeting held in Geneva, both sides exchanged views on regional issues and Iran nuclear deal, also known as the Joint Comprehensive Plan of Action (JCPOA).

Zarif also attended the quadrilateral meeting of Iran, Russia, Turkey, and the UN in Geneva focusing on the establishment of Syria’s Constitution Committee.

At the end of the meeting, he answered questions asked by the reporters.