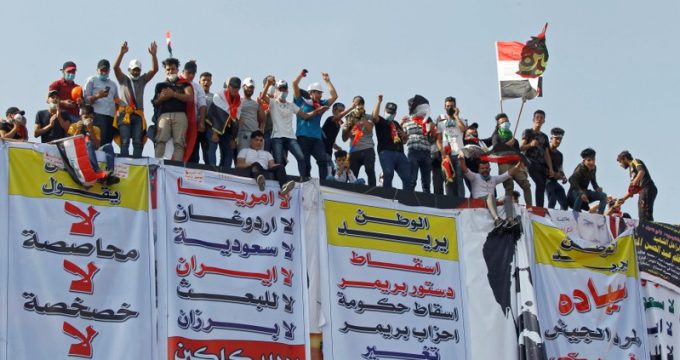 Reuters – Iraqi security forces killed one protester and wounded more than 50 on Thursday as tens of thousands resumed mass demonstrations to demand an end to the sectarian power-sharing system they blame for endemic corruption and economic hardships.

More than 250 people have been killed in clashes with security forces and pro-government paramilitary groups since protests began on Oct. 1 and eventually swelled into the worst mass unrest in Iraq since the 2003 fall of Saddam Hussein.

The protester was killed in the capital Baghdad early on Thursday when security forces fired a tear gas canister into his chest – the latest to die of canister-related injuries.

Meanwhile, Iraq’s political elite was gripped by a power struggle that raised pressure for the removal of Prime Minister Adel Abdul Mahdi but protesters said this would not be enough.

“We want a total change of government, we don’t want one or two officials fired and replaced with other corrupt ones. We want to completely uproot the government,” said protester Hussein, who did not give a last name, in Tahrir Square.

“They think we will protest for one or two days then go home. No, we are staying here until the government is uprooted.”

Protesters from across Iraq’s sectarian and ethnic divides thronged the center of Baghdad in a show of fury at an elite they see as deeply corrupt, beholden to foreign powers and responsible for daily privations and shambolic public services.

Protests also took place in seven other provinces, mostly in the southern Shi’ite heartland. Thousands gathered in Nassiriya, Diwaniya and oil-rich Basra while hundreds hit the streets in Hilla, Samawa, and the Shi’ite holy city of Najaf.

Despite OPEC member Iraq’s vast oil wealth, many Iraqis live in poverty or have limited access to clean water, electricity, basic health care and education. Most of the protesters are young people who above all want jobs.

Reporting by Ahmed Aboulenein with additional reporting by Aref Mohammed in Basra, Alaa al-Marjani in Najaf and Adam Hadi in Baquba; Editing by Mark Heinrich