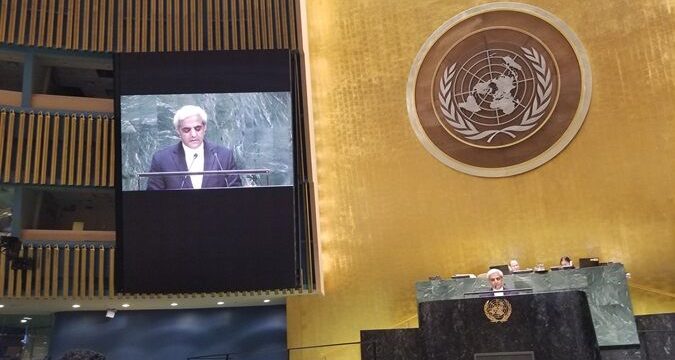 IRNA – The interim injunction granted by the International Court of Justice (ICJ) against the US’ illegal sanctions confirms Washington’s violation of international law, a senior Iranian diplomat said.

“On 3 October 2018, the Court unanimously indicated provisional measures, obliging the United States to remove any impediments arising from the measures announced following its withdrawal from the JCPOA in certain domains,” said Abbas Bagherpour, Director-General for International Legal Affairs at the Ministry of Foreign Affairs on Wednesday, addressing the 74th Session of the United Nations General Assembly on Agenda Item 74 on “Report of the International Court of Justice”.

“The Court’s unanimous order is a clear testament to the illegality of the United States’ sanctions against our country and its people, at least in the specified areas,” he added.

Bagherpour went on to slam the US for imposing those and other sanctions despite the court order.

“In response, the United States imposed numerous rounds of new sanctions and continuing the ones that existed when the provisional measures were indicated,” he said, adding that “such irresponsible behavior is in clear defiance of the Court’s Order, certainly laying in the scope of prohibited acts with an aggravating effect on the dispute at hand and would categorize as illegal wrongful acts contrary to the Court’s dictum”.

Iran filed an application together with a request for Provisional Measures to the International Court of Justice later in 2018 to protect its rights under the bilateral Treaty of Amity which was infringed as a result of the re-imposition of sanctions by the US.

“By adding multiple new sanctions since the call of the Court based on Article 78, the United States has disregarded the Court’s Order in a more blatant manner,” he warned in his speech in New York.

In early October 2018, the UN’s top tribunal unanimously ruled that the US must ensure that the re-instated sanctions are not impacting humanitarian aids or civil aviation safety.

Judge Abdulqawi Ahmed Yusuf read the final say of the court which obliged the US to “remove by means of its choosing any impediments arising from the measures announced on May 8 to the free exportation to Iran of medicines and medical devices, food, and agricultural commodities” as well as airplane parts.

The court further said that sanctions on goods “required for humanitarian needs… may have a serious detrimental impact on the health and lives of individuals on the territory of Iran.”

Abbas Bagherpour Ardakani, International Court of Justice (ICJ), US sanctions against Iran, US withdrawal from JCPOA October 31, 2019
Photos: Welcome to wooden mosque of Nishapur
What is next for crisis-hit Lebanon?