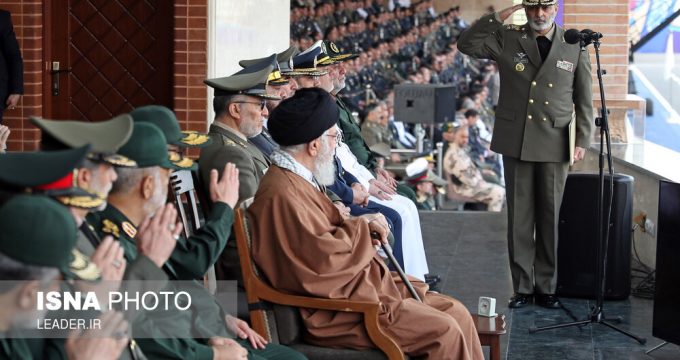 Press TV – Leader of the Islamic Revolution Ayatollah Seyyed Ali Khamenei has warned that the United States and Western spy services, funded by certain reactionary countries of the region, have been fomenting turmoil and insecurity in other regional states, calling for vigilance against such enemy plots.

The Leader made the remarks at the graduation ceremony of Army cadets at Khatam al-Anbia Air Defense Academy in Tehran on Wednesday.

Ayatollah Khamenei described insecurity as “the biggest damage” a country could suffer, warning against plots being pursued by the enemies to rob regional countries of security.

The elements instigating such “dangerous hostilities” are known, said the Leader, adding that “the US and the Western intelligence services, financed by certain reactionary countries of the region, are behind such incidents.”

Ayatollah Khamenei made the remarks in reference to the latest bout of violent protests that have gripped Iraq and Lebanon for several weeks.

The Leader said the Iraqi and Lebanese nations need to remain vigilant and realize that the enemies in fact intend to disrupt their domestic legal structures and create a vacuum in those states, advising people in both countries to follow up on their “legitimate demands” through legal channels.

“The top priority for them is to overcome insecurity,” Ayatollah Khamenei said, in an address to those who are concerned for the well-being of the people of Iraq and Lebanon.

The Leader recalled that Iran had been the target of similar conspiracies in the past, but that the country managed to thwart those plots thanks to the nation’s vigilance and the preparedness of its Armed Forces.

Ayatollah Khamenei further advised the Iranian nation and Armed Forces against putting their trust in the enemy, and asked them to constantly monitor all the enemy’s moves.

The Armed Forces should also be careful about the serious threat of “sedition” and stand prepared to confront it, the Leader added.