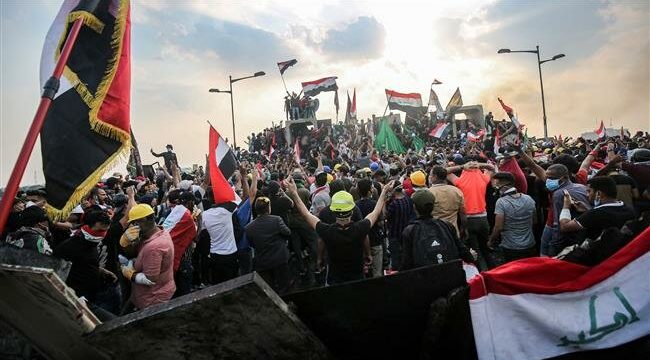 Press TV – The Iraqi capital Baghdad has become the scene of the largest rally since a second wave of anti-government demonstrations began in several cities last week.

Tens of thousands of Iraqi protesters gathered on Baghdad’s central Tahrir Square on Tuesday for a fifth successive day of protests driven by public discontent with economic hardship.

Blaring horns and lighting fireworks, the demonstrators, many draped in Iraqi flags, took to the streets brimmed with cars, taxis, motorcycles and tuk-tuks.

The protesters were defying army orders to clear the streets between midnight and 6:00 a.m. local time.

Security forces stationed on Jumhuriya bridge, which links Tahrir Square to the Green Zone, lobbed tear gas at the protesters.

An official investigation found that a total of 157 people, including civilians and security forces, had been killed in the first round of the rallies in the capital and other cities.

The rallies resumed on Friday after a pause of about two weeks. The gatherings have turned violent at some points over the past days, with conflicting unofficial reports of fatalities.

In a bid to placate the protesters, the parliament on Monday passed measures, including reduced salaries for officials, the formation of a committee to draft constitutional amendments, and the dissolution of all provincial and local councils outside the semi-autonomous Kurdistan Region.

However, the measures have apparently failed to satisfy the protesters, with trade unions representing teachers, lawyers and dentists declaring strikes.

A similar protest was also held in the holy city of Najaf on Tuesday, which was joined by prominent Shia cleric Muqtada al-Sadr, the leader of Iraqi parliament’s largest bloc.

Sadr also asked Hadi al-Amiri, the leader of Iraq’s second largest party, to help him introduce a vote of no confidence in Prime Minister Adel Abdul-Mahdi.

He had earlier called on Abdul-Mahdi to come to parliament and announce “early elections under the supervision of the United Nations,” a call which the premier refused, citing constitutional and operational challenges.

“To answer brother Abdul-Mahdi, I thought asking you to call an early election would preserve your dignity but as you have refused, I invite brother Amiri to work with me on withdrawing confidence from you immediately,” Sadr said.

Accepting Sadr’s invitation, Amiri said, “We will work together to achieve the interests of the Iraqi people and save the country as required by the public interest.”