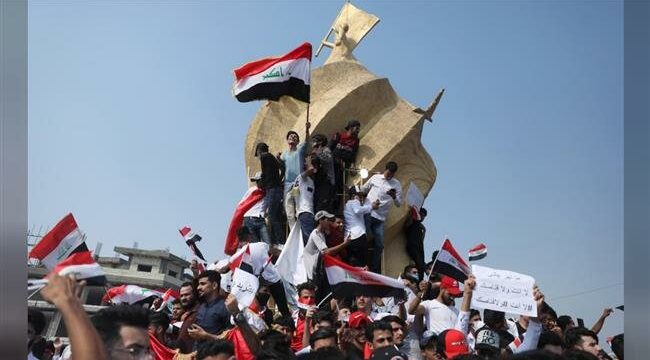 Press TV – Students and schoolchildren have joined protests in the capital Baghdad and cities in southern Iraq, defying the education minister who had warned them against partaking in the unrest.

In the city of Diwaniyah on Monday, the union of universities and schools announced a 10-day strike.

Several local syndicates, including lawyers and engineers, have also joined the unrest, trying to prevent government workers from reaching their offices.

Iraq’s higher education minister had asked students and education staff to stir clear of the unrest, saying Sunday that academic life should “stay away” from protests.

In Baghdad on Monday, demonstrators gathered on campuses and in Tahrir Square.

The government of Prime Minister Adel Abdul-Mahdi has pledged to fulfill protesters’ demands while finding the elements who have infiltrated the protests to stir unnecessary violence.

UN special envoy for Iraq Jeanine Hennis-Plasschaert met with Abdul-Mahdi in Baghdad on Sunday to discuss the protests, warning against attempts to infiltrate the ranks of protesters.

According to her twitter account, the envoy and Abdul-Mahdi agreed on “the need to protect the peaceful nature of the demonstrations.”

They also emphasized the need for working together on the swift implementation of a reform package that the Iraqi government has introduced to address the protesters’ demands.

Hennis-Plasschaert had earlier in the day met with President Barham Salih, discussing the same topics along with the electoral process and a national dialogue for political reforms in Iraq.

In a brief video, Hasan said he was doing fine and his supporters did not need to worry about his well-being.

The statement came after a short video emerged online purporting to show an heavily injured Abu Azrael lookalike being rushed to the hospital while bleeding from a wound in the torso.

The rumors of Hasan’s assassination by anti-government protesters and his possible death came after he was spotted on a few occasions speaking to protesters in an attempt to calm them.

Anti-government protests made a return in Iraq on Friday, as thousands of people once again took to the streets to vent their anger over corruption and less than optimal living conditions.

The protests soon turned deadly as armed elements opened fire on both protesters and security guards. Iraqi security agents have so far arrested a few gunmen and the country’s elite Counter Terrorism Force has been deployed to the streets to prevent damage to sensitive centers.