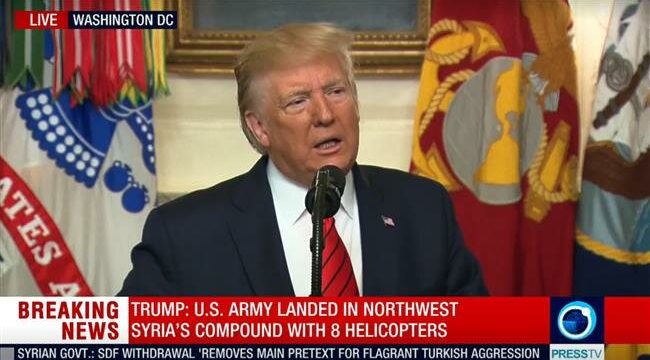 Press TV – US President Donald Trump says Daesh leader Abu Bakr al-Baghdadi blew himself up, dying “like a dog,” and “like a coward” after American forces trapped him inside a dead-end tunnel.

“Last night the United States brought the world’s number one terrorist leader to justice,” Trump said while addressing the media at the White House on Sunday.

The president said the Daesh leader detonated his suicide vest while “crying and whimping” during an overnight raid by American special ops forces in Syria.

He said the explosion was so strong that al-Bghdadi’s body was “mutilated” and the tunnel was destroyed but forensics teams were able to identify his remains.

“He reached the end of the tunnel as our dogs chased him down. He ignited his vest, killing himself and his three children. His body was mutilated by the blasts. The tunnel had caved on him,” Trump claimed.

Al-Baghdadi’s identity was confirmed by on-site DNA tests “15 minutes” after he was killed, Trump said, adding, the tests provided “certain, immediate and totally positive” identification that the body belonged to the terrorist chief the US has hunted for so long.

“The thug who tried so hard to intimidate others spent his last moments in utter fear, panic and dread, terrified of the American forces coming down on him,” he continued.

He noted that many of al-Baghdadi’s “people” were killed in the operation but no American soldiers were killed or injured.

The American president said he watched the operation alongside Vice President Mike Pence, Defense Secretary Mark Esper and a few others.

He marveled to reporters about the quality of the video feed, saying it was “like a movie.”

Trump also thanked Russia, Turkey, Iraq and Syria as well as Syrian Kurds for helping with the operation.

The American head of state claimed that Moscow “did not know the nature” of the mission, but was informed ahead that it was going to happen.

The spokesman of the Iranian President Hassan Rouhani’s administration reacted to the killing of al-Baghdadi by reminding the world that Iran has been always spearheading the war against terrorism in the region.

“Iran has been a pioneer in the front line of the fight against terrorism by proposing an initiative to create a world free from violence and extremism … and has been spearheading the fight against Daesh while defending a diplomatic, strategic and ideological approach to Daeshism,” Ali Rabiei said in a Twitter post on Sunday.

He added that the United States has been trying to hold a monopoly on the civilizational discourse and to make the world believe that deployment of forces and its ruthless sanctions are part of the fight against terrorism.

“However, terrorism in the Middle East and North Africa is a child of the United States’ militarized policies, devouring [regional] oil [resources] and its support for despotism,” the Iranian spokesman added.

Following Trump’s announcement, the Iraqi military issued a statement, saying that its National Intelligence Service found al-Baghdadi’s location and provided it to the United States.

“After constant monitoring and the formation of a specialized task force over an entire year, the Iraqi National Intelligence Service acting on accurate information was able to locate the den in which the head of Daesh terrorists Abu Bakr al-Baghdadi and those with him were hiding in the Syrian province of Idlib,” the statement added.

Meanwhile, the so-called Syrian Democratic Forces (SDF) also claimed on Sunday that the operation that killed al-Baghdadi took place after its intelligence pinpointed his location.

Senior SDF official Redur Xelil said at a news conference that their forces would now intensify intelligence operations and efforts to chase down Daesh sleeper cells.

The group also blamed a Turkish assault on northeast Syria for delaying the Baghdadi operation by more than a month.

Russia says has no reliable information on US operation

“The Russian Ministry of Defense does not have reliable information on the US servicemen conducting in the Turkish-controlled part of the de-escalation zone of Idlib an operation on yet another ‘elimination’ of the former IS leader Abu Bakr al-Baghdadi,” Major-General Igor Konashenkov was quoted by RIA news agency as saying.

France: Baghdadi’s death not end of Daesh
In a related development, French Defence Minister Florence Parly congratulated the United States for the operation that led to the death of al-Baghdadi, but warned that this did not mean the end of the terror group.

“Baghdadi: early retirement for a terrorist, but not for his organization,” Parly said on her Twitter feed, adding that Paris will adapt to new regional circumstances.

French President Emmanuel Macron also said on his Twitter that the death of al-Baghdadi is a hard blow for Daesh, noting, however, that it is just a stage in the fight against the terrorist outfit.

“Al-Baghdadi’s death is a hard blow against Islamic State (an alternative name for Daesh), but it is just a stage. With our partners in the international coalition, the fight continues to finally defeat this terrorist organisation. It is our priority in the Middle East,” Macron said.

In reaction to the killing of the Daesh leader, Turkish President Recep Tayyip Erdogan took to Twitter on Sunday, hailing the development and calling it a “turning point” in the fight against terrorism.

“The killing of Daesh’s ringleader marks a turning point in our joint fight against terrorism,” Erdogan said in his first tweet.

The killing of Daesh’s ringleader marks a turning point in our joint fight against terrorism. Turkey will continue to support anti-terror efforts — as it has done in the past.

“I am confident that a decisive struggle against terrorism … will bring peace to all of humanity,” he added in a second tweet.

Having paid the dearest price in the fight against Daesh, PKK/YPG, and other terrorist organizations, Turkey welcomes this development.

I am confident that a decisive struggle against terrorism, in line with the spirit of alliance, will bring peace to all of humanity.

Turkey says coordinated with US on Baghdadi raid

Turkey Defense Ministry said on Sunday that there was “coordination” between Ankara and Washington before the operation, which killed al-Baghdadi.

“Prior to the US Operation in Idlib Province of Syria last night, information exchange and coordination between the military authorities of both countries took place,” the ministry said in a tweet without giving any details.

Meanwhile, AFP quoted an unnamed senior Turkish official as saying, “To the best of my knowledge, Abu Bakr al-Baghdadi arrived at this location 48 hours prior to the raid. We have been in close coordination with the relevant parties.”

“The Turkish military did have advance knowledge of last night’s raid,” the source noted, adding, “I can neither confirm nor deny that any intelligence was shared to facilitate last night’s operation.”

Baghdadi was reportedly targeted in the early hours of Sunday in the Syrian village of Barisha near the Turkish border, in an operation which involved helicopters, warplanes and a ground clash.

A senior Pentagon official familiar with the operation and a US Army official briefed on the matter told the media early on Sunday that a “high value ISIS (Daesh) target” – believed to be Baghdadi – was targeted during a top-secret operation in Syria’s Idlib province.

Idlib is the last bastion of foreign-backed terrorists, where a “safe zone” set up by Turkey has prevented Syrian troops from returning the territory to the government fold.

The Turkish Defense Ministry said Turkish and US military authorities had exchanged and coordinated information ahead of the attack.