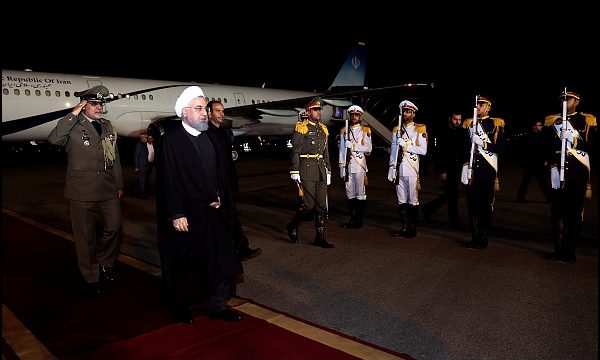 Rouhani back home from Baku

IRNA – President Hassan Rouhani who was in Azerbaijan to attend the 18th NAM Summit in Baku arrived in Tehran late on Friday.

During his two-day visit to Baku which took place at the official invitation of his Azeri counterpart Ilham Aliyev, President Rouhani explained Iran’s stances vis-à-vis regional and international developments during the international summit.

On his first day of visit to Baku, he sat down for talks with President Aliyev to discuss issues of mutual interest as well as major regional and international issues.

President Rouhani also held talks with the Venezuelan, Cuban, Pakistani and Algerian presidents as well as Malaysian and Bangladeshi prime ministers on the sidelines of the 18th NAM Summit.