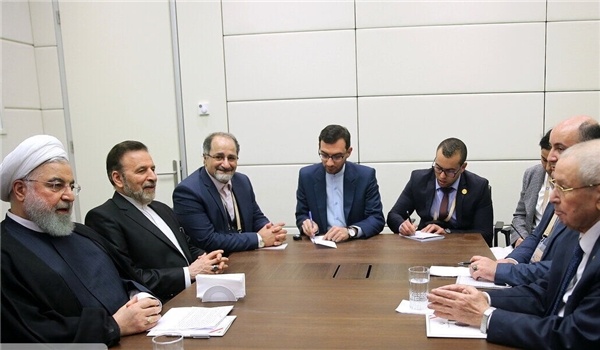 During the meeting on the sidelines of the 18th Non-Aligned Movement (NAM) Summit meeting in the Azeri capital on Friday, President Rouhani and the Algerian interim president explored the avenues for bolstering and reinvigorating mutual cooperation in different political and economic fields.

During the meeting, the Iranian president said that Iran and Algeria have cordial relations, adding that the two countries should enhance economic and trade cooperation.

Bin Saleh, for his part, described the two countries as historic and strategic.

“I am happy that the two countries have common stances in most of the fields, which should lead to promotion of economic cooperation proportionate to the two countries’ capabilities and capacities,” he added.

The 18th Summit of the Heads of State and Government of the NAM with the participation of the heads of 60 countries, including President Rouhani, kicked off in Baku, Azerbaijan on Friday.

The NAM is a forum of 120 developing world states that are not formally aligned with or against any major power bloc. After the United Nations, it is the largest grouping of states worldwide.

At the NAM Baku Summit, the Republic of Azerbaijan will take over the chairmanship of the Non-Aligned Movement for the next 3 years.