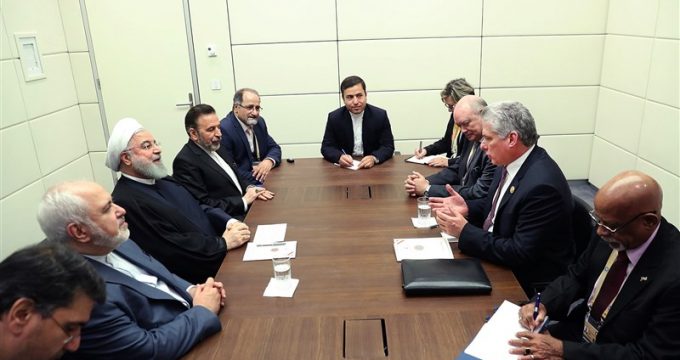 Arrogant powers have no choice in face of Iran, Cuba but to surrender: Rouhani

Tasnim – President Hassan Rouhani praised the resistance of the Iranian and Cuban people against the US pressures and said the arrogant powers, including Washington, have no option in the face of the two nations but to surrender.

Speaking at a meeting with Cuban President Miguel Diaz-Canel in the Azeri capital of Baku on Friday evening on the sidelines of the 18th Non-Aligned Movement Summit, Rouhani hailed Cuba as “a nation of struggle and resistance”.

“Cuba and Iran pay the price of their independence,” he said, adding “Our nation’s resistance is proverbial in the Middle East, and if it were not for your resistance, the US would have dominated not only Cuba but Latin America.”

“There is no doubt that the two countries will pass through this (difficult) stage through working together and that the arrogant powers have no choice in the face of our resistance but to surrender,” Rouhani noted.

Rouhani’s remarks come against the backdrop of increased tensions between Iran and the US with Washington imposing new sanctions against the Islamic Republic.