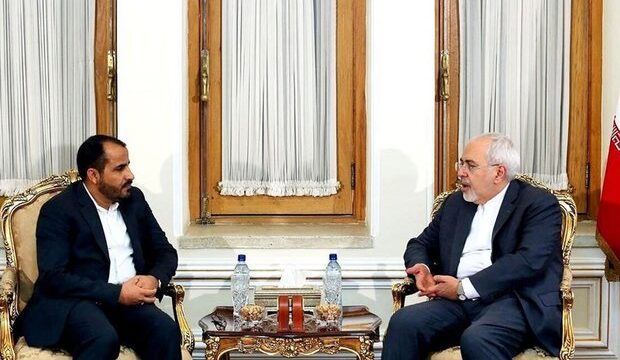 Zarif, in this meeting, expressed regret about the massacre of Yemeni people and the 5-year siege of Yemen, calling for an end to war in the country.

Heading a delegation, Mohammad Abdul Salam paid a visit to Tehran earlier in August, holding separate talks with the Iranian top diplomat and the Leader of the Islamic Revolution Ayatollah Seyyed Ali Khamenei.

In the meeting, Ayatollah Khamenei said that the Saudi and UAE coalition have committed big crimes in their aggression on Yemen, while stressing that their attempts in Yemen will definitely fail.

The Iranian Leader said that the Saudi-led coalition seeks to partition Yemen along with religious and ethnic lines, stressing the need for firm support for preserving Yemen’s territorial integrity.

He also said that given the religious and ethnic diversity of Yemen, preserving its territorial integrity needs Yemeni-Yemeni dialogue.

Elsewhere in his remarks in the meeting, Ayatollah Khamenei expressed his condolences and congratulations on the martyrdom of Ibrahim al-Houthi, brother of the leader of Ansarollah Houthi Abdul-Malik al-Houthi.

The Leader also hailed the resistance of Yemeni people against foreign aggression and predicted a bright future for the Yemeni nation.

He went on to condemn the western countries’ turning a blind eye on crimes in Yemen and Palestine, describing resistance with reliance on Allah’s help as the only way ahead.

Also in the meeting, the head of the Yemeni described the leadership of Ayatollah Khamenei as in the continuation of the Velayat of Holy Prophet Muhammad (PBUH), Imam Ali (AS) and Imam Khomeini (RA).

Expressing his gratitude for the support of the Leader of the Islamic Republic for the oppressed nations, especially the oppressed Yemeni nation, Mohammad Abdul Salam said that the Yemeni nation’s resistance will continue until final victory.