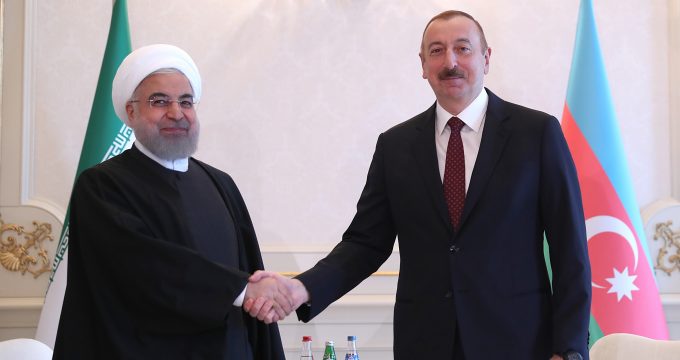 Press TV – Iran’s President Hassan Rouhani says the Islamic Republic is ready to boost its relations with the neighboring Republic of Azerbaijan in the Caspian Sea region, noting that the two courtiers’ ties currently stand at a satisfactory level.

Rouhani made the remarks on Thursday afternoon in a meeting with his Azeri counterpart Ilham Aliyev in Baku, where the Iranian president is to take part in the summit of the Non-Aligned Movement (NAM).

Describing the Caspian Sea as “the sea of development, peace and friendship,” Rouhani said, “Iran is always ready to develop maritime cooperation with Azerbaijan in the Caspian basin with regard to exploration [of undersea resources] and [protection of] environment.”

He added that the Iranian government and nation have always stood by the Azeri nation and government at international forums, noting that the two countries together could help promote regional and global peace and security.

The Iranian president further highlighted the importance of enhanced ties between Iran, Azerbaijan and Russia and said, “Tehran, Baku and Moscow should further expand their trilateral and joint cooperation.”

Rouhani said the development of ties and joint cooperation between Tehran and Baku would serve both countries as well as the region.

Aliyev, for his part, hailed a 70 percent growth in the volume of trade transactions between Tehran and Baku and said the two nations’ cooperation in the areas of energy, banking, industry, and transportation within the framework of their joint economic commission is  well progressing.

The Azeri president added that good progress has been made in construction activities for the International North-South Transport Corridor (INSTC), which links the Indian Ocean and the Persian Gulf via Iran to Russia and North Europe.

Aliyev further voiced his country’s willingness to enhance cooperation with the Islamic Republic in all areas, calling for Iran’s contribution to Azerbaijan’s power plant construction, transportation, and oil exploration projects.

Rouhani will attend and deliver a speech at the 18th NAM summit on Friday.

The NAM ministerial meeting was held on Wednesday and Thursday, before the 18th summit of NAM heads of states that will be held on October 25 and 26.

Azerbaijan will take over the chairmanship of the Non-Aligned Movement for the upcoming three years.

NAM, an international organization with 120 member states and 21 observer countries, represents nearly two-thirds of the UN members. It is considered not formally aligned with or against any major power bloc.