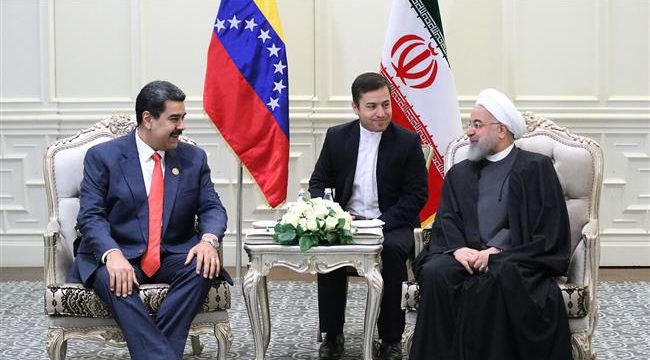 Press TV – Iranian President Hassan Rouhani has praised the “resistance of the Iranian and Venezuelan nations” against US attempts to target the two countries, calling for an expansion of bilateral relations between Tehran and Caracas.

“Iran and Venezuela have and will continue to back each other in all international and political bodies,” Rouhani said during a meeting with Venezuelan President Nicolas Maduro on the sidelines of the 18th Non-Aligned Movement (NAM) summit in Azerbaijan’s capital of Baku on Friday.

“We are ready to provide Venezuela with our experience in technical areas such as cyber platforms, new technologies and also agriculture in addition to strengthening cooperation in financial and banking sectors,” Rouhani said.

“Most of Iran’s economic indicators have been positive in recent months,” Rouhani said, adding that “the Americans have not been able to achieve success in any of their plans in our region, from Iraq and Syria to Palestine, Afghanistan and Yemen.”

Rouhani invited Maduro to visit Tehran during the meeting.

Speaking on his part, Maduro also called for a further expansion of ties in the framework of a joint cooperation committee set up between the two countries.

The Venezuelan president praised Iran’s endurance against US pressure, saying that both countries have forced the US “to backtrack on its ambitious schemes and accept defeat.”

Addressing US attempts targeting the two nations and other non-aligned countries, Maduro said, “Today all independent countries have formed an extensive front against the extremist and radical measures of the US.”

“This is highly valuable,” he added.

The remarks by the two presidents come as Iran and Venezuela have endured major economic and political US pressure seeking to weaken the countries.

In May 2018, US President Donald Trump unilaterally withdrew his country from the 2015 Iran nuclear deal and unleashed the “toughest ever” sanctions against the Islamic Republic.

The bans prohibited selling a wide range of vital goods to Iran, including passenger airplane parts and much-needed pharmaceuticals.

The US has also sought to pressure and heighten its rhetoric against Iran by deploying additional military forces in the region in the past year.

Washington has also sought to target Venezuela, imposing several rounds of sanctions in a bid to oust President Maduro and have him replaced with the Washington-leaning figure Juan Guaido, who declared himself “interim president” earlier this year.