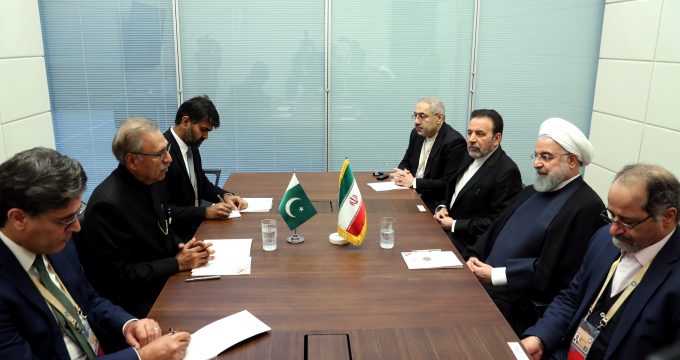 President in a meeting with his Pakistani counterpart: Iran, Pakistan determined to deepen ties

President.ir – President described Iran-Pakistan relations developing and deepening, and referred to the deep bonds between the two nations, stressing that the two countries’ senior officials are determined to further deepen Tehran-Islamabad relations.

Speaking with President Arif Alavi of Pakistan on Friday on the sidelines of the 18th Summit of Heads of State and Governments of the Non-Aligned Movement (NAM) in Baku, President Hassan Rouhani said, “Iran and Pakistan enjoy good potentials for development of cooperation and Iran has put deepening cooperation with regional countries, including Pakistan, in its priorities”.

The President referred to the numerous meetings of senior Iranian and Pakistani officials in recent years and the role of these meetings in developing more and more cooperation, adding, “Within the framework of these meetings, good agreements have been made in the fields of science, research and energy, including the Peace Pipeline. We hope that these agreements are implemented as soon as possible in the interest of both nations and the region”.

Condemning the US unilateral policies in the international and regional arena, Dr Rouhani said, “Iran continues to live up to its commitments despite the US’ unilateral withdrawal from the Joint Comprehensive Plan of Action (JCPOA)”.

The president also praised Pakistan’s efforts to stabilise the region and establish security at the common borders, stating that the two countries’ cooperation in the fight against terrorism is paramount.

Mentioning that the Iranian and Pakistani governments have always supported each other in international and regional forums, Dr Rouhani said, “We believe that the only solution to the problems in the region is negotiation and dialogue”.

At the same meeting, the Pakistani President said, “The current volume of Pakistani-Iranian trade relations in view of the existing capacities should increase more than ever”.

Arif Alavi said that the Pakistani people have deep and long-standing ties with the Iranian people, and they value and appreciate the Iranians’ resistance against obstacles and difficulties, adding, “The people of Iran, during the imposed war as well as the US sanctions, were well able to overcome the crises and challenges and can certainly overcome the problems to come”.

In support of the Joint Comprehensive Plan of Action (JCPOA) and expressing regret over the United States’ withdrawal from the deal, he said that the move has raised global concerns.

The Pakistani president also described the Pakistani Prime Minister’s visit to Iran and Saudi Arabia very fruitful and expressed hope that good friendship and relations are established among Muslim brothers, adding, “Pakistan, like Iran, believes that the region’s problems would only be resolved at the negotiating table. And in line with this policy, it is using its full power to create an atmosphere of dialogue between countries in the region”.

Referring to the long border between Iran and Pakistan, President Alavi said, “Islamabad also shares views on the importance of maintaining border security with Iran, and we have made every effort to do so, and we believe that some external actors, who have posed threats to the regional security, must stop their actions”.