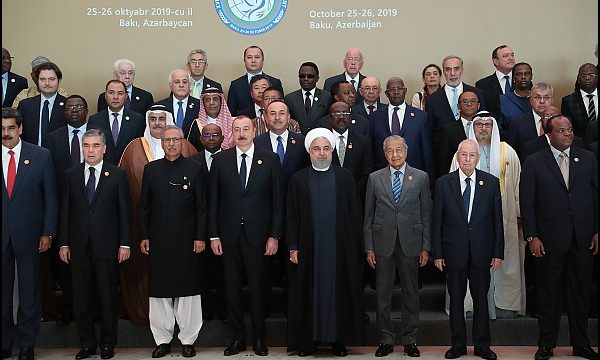 MNA – The 18th Non-Aligned Movement (NAM) Summit kicked off in Azeri capital Baku on Friday in the presence of Iranian President Hassan Rouhani.

The senior officials of participating countries in the Non-Aligned Movement (NAM) were welcomed by President of the Republic of Azerbaijan Ilham Aliyev upon their arrival at the venue of the Summit.

The ceremony began with a minute of silence for the honor of the deceased heads of the Summit. Then, Venezuelan President Nicolas Maduro, as the head of 17th NAM Summit, delivered a comprehensive report on the activities and performance of the Movement between 2016 and 2019.

The ceremony followed with the selection of Azerbaijan Republic President Ilham Aliyev as the head of the 18th Non-Aligned Movement (NAM) Summit.

The inaugural ceremony continued with determining the agenda of Summit, selecting members of the Summit Office, exchanging views on the relevant issues, reading the message of the UN secretary-general and also a statement of Group-77, lecturing the representatives of S America, Asia-Pacific and African region and also the Caribbean region.