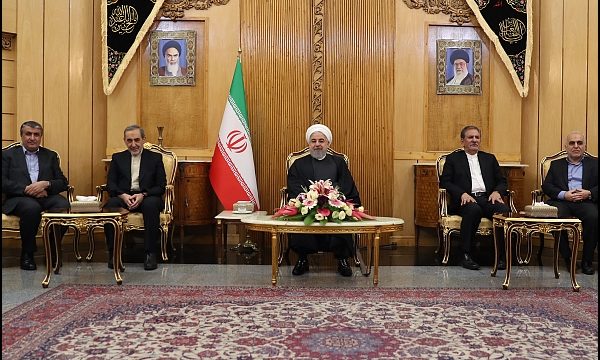 US plots to isolate Iran have failed, says President Rouhani

Tasnim – Iranian President Hassan Rouhani said the country’s international standing continues to rise despite the US’ vain attempts to isolate the Islamic Republic.

Speaking to reporters before leaving Tehran for Baku on Thursday, Rouhani said he would attend the 18th Summit of the Non-Aligned Movement (NAM) at the official invitation of his Azeri counterpart Ilham Aliyev.

Stressing the need for Iran’s strong presence in regional and international conferences, the president said, “While the Americans are beating the drum of unilateralism, seek to meddle in the affairs of all countries and regions in the world, and their hostility towards the great Iranian nation has become clearer than ever, we must have a more active presence in all regional and global conferences and international organizations.”

Denouncing the US attempts to isolate Iran in the world, the president said the Islamic Republic’s standing among the world countries has been constantly improving in spite of Washington’s plots.

“Today, there’s no doubt that the Islamic Republic of Iran is a very important and influential country in the region, and this great nation would not be brought to its knees in the face of the hostile plots, particularly from the US, or the sanctions and blockade,” he underlined.

The president explained that Iran’s partnership in the regional and international meetings and organizations would help ensure the country’s interests and national security.

On the ties between Tehran and Baku, Rouhani said the bilateral relations have grown over the past 6 years, adding, “The ties with Azerbaijan, as a friend and neighbor, has special significance to us. We have deep-rooted, historic and cultural bonds, as the relations are moving towards a strategic relation.”

Rouhani also noted that he will be meeting officials from the NAM member states on the second day of his stay in Baku.