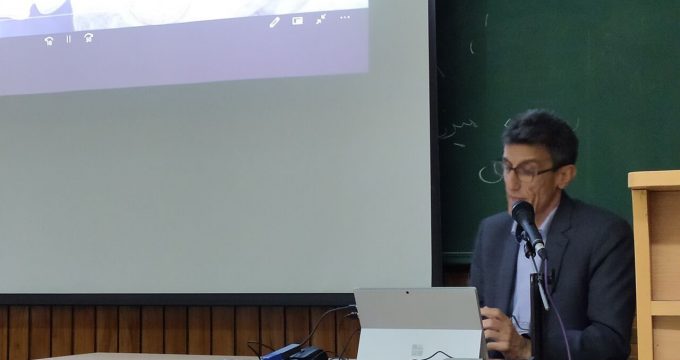 Iran and centuries of mediation between East, West civilization

IRNA – Iran and China have been deeply connected since ancient times, and the presence of Persian antiquities in China as well as the presence and influence of the Persian language in this land is highlighting this longstanding bonds.

Mohammad Baqer Vosouqi, a professor of history at the University of Tehran who was in China for one year of sabbatical leave, after his return, during a meeting entitled “Reporting a Scientific Trip to China: New Findings of Iranian Immigrants in Port Yanjou (from the Sassanid Period to the Mongol Period)” , which was held on Monday at the Faculty of Literature and Humanities, University of Tehran, described his achievements and the results of his latest studies on Iran-China relations.

He initially emphasized that Iran and China have a long history of political relations, but so far less has been considered from Iranian and Chinese scholars’ points of view, and we have only looked at these relations from the European point of view. China has always been an influential example of Orientalism, and from the second half of the 19th century, the Germans first entered the field of Chinese studies and then the French and English.

Vosouqi added that all Chinese scholars unanimously believe that to understand Chinese civilization properly – which is a multifaceted civilization – one must also have a look at Iranian culture that is intertwined. “The Iranians are the biggest mediators of the West and the East,” wrote German sinologist Bertold Löfer. “They have transferred the legacy of Hellenism to Central Asia and the Far East, while at the same time bringing many Chinese goods to the Mediterranean.” And our work in history has always been mediation. Our civilization has been dependent on the caravan, and even in the Persian literature the caravan and bell have become the source of inspiration for the poets, and this shows the traditions of trade and shuttles that have become embedded in our history and that whenever we have used, we have come up. Because we are the greatest mediator of eastern civilization, namely China, and the west, Roman, and have been the immediate neighbor of the Chinese for 1200 years. Naturally, this link has made it easier for us and the Chinese to communicate.

He then went on to discuss four periods of maritime relations between Iran and China, saying that the first signs of this relationship go back to the Parthian. The next period is the Sassanid period and the time of Khosrow Parviz. The third period is the first centuries after Islam and the last period, after the Mongols, known as the Age of Immigration, during which 3.5 million Iranians migrated to this land.

The professor, with this introduction, gave a brief description of each period, stating that the oldest Iranian monument in China is from the first century BC, preserved in the Guangzhou Museum, a silver container, because it was Iran’s oldest maritime trading partner and its museums are full of Iranian monuments. The city has four mosques, the first of which was built during the Seljuk period by the Sirafis, and is still the site of reference for Guangzhou Muslims. Even the world’s only Mano’i temple called “Tsao An” is located in Jin Jiang, China. Similarly, another sinologist, Rachel, believes that “By the early seventh century, all Indian, Ceylon and East African goods would reach the Chinese ports and being introduced as Iranian goods.”

The historian noted that during the Sassanid period, this trend continued, with eight prominent pieces of Sassanid fabric manuscript existing in China indicating the continued existence of Iran in China. In the early centuries after Islam, the Sirafis traveled to China to form colonies, and even Abu Zaid Sirafi, who traveled to China eight times, reported on the Siraf rebellion in 223 AH. It was from this period that maritime trade flourished, with Siraf in Iran and Yangzhou on the other. Situated near the city of Shanghai – which the British built in the second half of the 19th century – this ancient city is adjacent to the Yangtze River, 742 kilometers away. Its name is traceable in Islamic geographical texts, and it is even interesting to note that Al-Biruni externally measured its length and width in astonishing accuracy in his book “Massoudi’s Law”.

Vosouqi then spoke about the fourth period when the greatest migration of the Middle Ages occurred, stating that this migration is so significant that it is mentioned in the “History of Jahangosha” of the Ata Malek Joveini written probably in the year 658 AH.

Vosouqi said a prominent Iranian immigrant was Aladdin, a prominent businessman who even saw Ibn al-Bout’a and lived at his house one night and wrote about his wealth. They were from Jajorm, Tabriz, Qazvin, Fars and some other parts of Iran, and what is clear is their maritime trade with Siraf. They lived in a place where they left many inscriptions that were drawn from a mixture of Islamic and Chinese tradition, and now that village in Yanju, called “Jo Shu Gahe”, is known as the “Persian Village” and as has written the Iranians have had enormous wealth, and the Chinese saying “the Persians play with jewelry” goes back to the same time. Interestingly, the Chinese government has a strong resolve to preserve this complex, and Iran needs to be sensitive to it. The Persian language was once so popular in the area that on a 18-meter-long Chinese scroll of silk with a Buddhist prayer, Persian language was also included, or on a beautiful ceramic bowl a couplet from Saadi in Persian has been engraved.

A member of the faculty of history at the University of Tehran concludes that cultural relations with China can fill the vacuum of unknowing. We have scarce resources from the Parthians, but searching in China can help us. Or since the early centuries after Islam there is a source in China that will be a guide in our studies. In addition to China, India has a similar position. We did not lose the power and position of the mediator, and cyberspace can close the gap. When former businessmen and intellectuals in the ways of finding, were traveling, so it makes sense to discover the world today, and we must still know China as our neighbor.