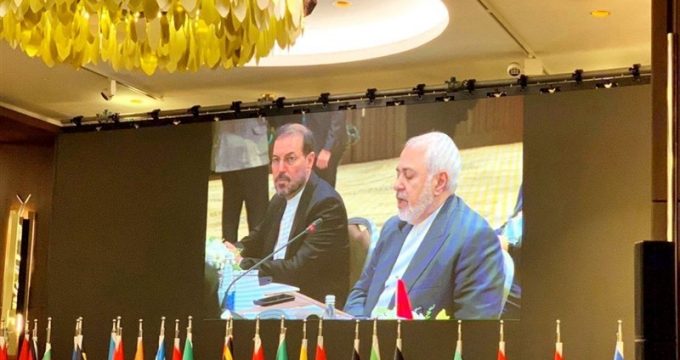 Tasnim – Iran’s Foreign Minister Mohammad Javad Zarif criticized the US for its addiction to sanctions and “economic terrorism”, calling on the international community to take a “unified” stance and compel Washington to “reverse its dangerous course”.

“In fact, the US’ addiction to sanctions—or more correctly economic terrorism—against the people of many non-aligned countries, including Cuba, Venezuela, Syria, Iran and even major powers such as China and Russia, is undermining the fabric of international economic relations, and putting hundreds of millions of people, as well as global commerce, at risk,” Zarif said on Wednesday addressing the Non-Aligned Movement (NAM) ministerial meeting underway in Baku, the Republic of Azerbaijan.

He added, “There is an urgent need for a unified stance by the international community to compel the US to reverse its dangerous course in order to avert a global catastrophe”.

The two-day meeting kicked off in the Azeri capital on Wednesday. It is being held before the 18th summit of NAM heads of states that will be held on October 25 and 26. Azerbaijan will take over the chairmanship of the Non-Aligned Movement for the upcoming 3 years.

Iranian President Hassan Rouhani will attend the 18th summit of NAM heads of states on Friday.

NAM, an international organization with 120 member states and 21 observer countries, represents nearly two-thirds of the UN members. It is considered as not formally aligned with or against any major power bloc.

Following is the full text of Zarif’s speech at the meeting:

I would like to begin by thanking our neighbors and brethren—the people and government of the Republic of Azerbaijan—for organizing this NAM Summit and for the warm hospitality they have extended to the participants. My gratitude also goes to the Bolivarian Republic of Venezuela for proficiently presiding over our Movement during the past three years.

An escalating contempt for diplomacy, multilateralism and international cooperation has exacerbated the chronic challenges and increased uncertainties around the globe. International law, multilateral agreements, Security Council resolutions, and the norms of civilized behavior are all seemingly being sacrificed for personal political ambitions.

West Asia suffers the most from this vendetta against the global order:

The Palestinian right to self-determination, as one of the most important NAM objectives, is being trampled on by unilateral and destructive US policies; particularly by its illegal and dangerous positions on Al-Quds and the Golan. The Zionist regime has been emboldened by the US’ blind support—and unfortunately also by the short-sighted acquiescence of some in our region—to usurp and absorb more, and even more, of Palestine.

The horrendous atrocities against the people of Yemen, along with the regional ramifications of that war—conducted with full US backing—threaten to spiral out of control and lead to further escalation and insecurity in the region and beyond.

The irresponsible action by the US in its withdrawing from the JCPOA—despite Iran’s full adherence to its commitments—has been another major disrupting element in our region and beyond. The American economic war—indeed its economic terrorism—targeting ordinary Iranian people and wishfully attempting to starve them into submission—is not just a willful and publicly-announced crime against humanity, but a grave and immediate threat to international peace and security.

In fact, the US’ addiction to sanctions—or more correctly economic terrorism—against the people of many non-aligned countries, including Cuba, Venezuela, Syria, Iran and even major powers such as China and Russia, is undermining the fabric of international economic relations, and putting hundreds of millions of people, as well as global commerce, at risk.

There is an urgent need for a unified stance by the international community to compel the US to reverse its dangerous course in order to avert a global catastrophe.

Today, the United States has even proven its propensity to betray its own clients. Many have learned that it is wishful—if not suicidal—to expect the US to provide them protection and support.

But it is our people who are paying the price for the US’ reckless behavior. As such it is absolutely imperative for the members of our movement to close ranks and engage in collective and innovative thinking—and action—to reverse this course, or at least to reduce its impact on our peoples.

The Hormuz Peace Endeavor (HOPE) that President Rouhani presented at the United Nations this past September is one such effort. It aims to promote dialogue, mutual respect and equal footing, respect for sovereignty, territorial integrity and the inviolability of international borders; peaceful settlement of all disputes; rejection of the threat or use of force; non-aggression and non-intervention in internal or external affairs of each other; and energy security and the free flow of resources.

We again invite our neighbors and all our partners in NAM to work with us to enrich and implement HOPE.