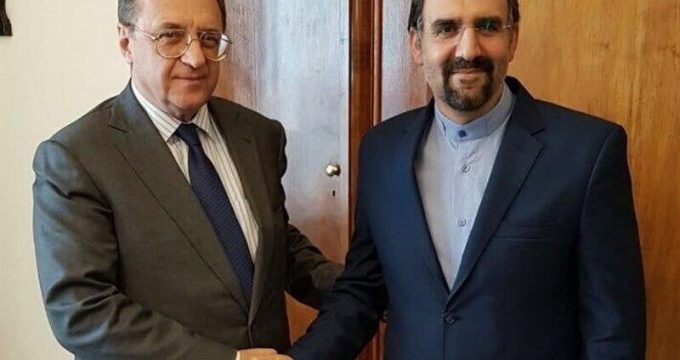 Iran – The ambassador of the Islamic Republic of Iran and the Russian president’s envoy in the Middle East and North Africa affairs examined recent developments in the Persian Gulf and Syria.

Mehdi Sanaee met with Russian Deputy Foreign Minister and Russian President’s Special Representative for the Middle East and North Africa Affairs Mikhail Bogdanov on Monday and discussed developments in the Persian Gulf and the Middle East.

In addition to discussing the latest developments in the region, the parties discussed the Islamic Republic of Iran’s initiative to secure the region “Hormuz Peace Endeavor” and Russia’s plan for collective security in the Persian Gulf region.

Iranian President Hassan Rouhani recently unveiled a “Hormuz Peace Endeavor” or “Coalition of Hope” initiative at the United Nations aimed at contributing to regional security in the Persian Gulf.

Iranian Foreign Minister Mohammad Javad Zarif also recently outlined the initiative, at the UN Security Council meeting, chaired by Sergei Lavrov in New York, and stressed the need for regional cooperation for peace and stability in the Persian Gulf, calling for the countries of the region to join.

The head of Iran’s diplomatic apparatus in the meeting “United Nations cooperation with regional organizations” that was held in the UN Security Council, said that Mr. Rouhani, in his speech, called for the Hormuz Peace (Hope) initiative and invited all countries in the region to participate in the initiative.

He emphasized the importance of the proposal put forward by the Russian Federation on the security mechanism in the Persian Gulf, adding that I must explain that the “Hope” initiative is based on the fact that all countries in the region have a duty to guarantee peace, stability, and prosperity in the region. Together with the international community, they share a common interest in maintaining freedom of shipping and energy transfer.