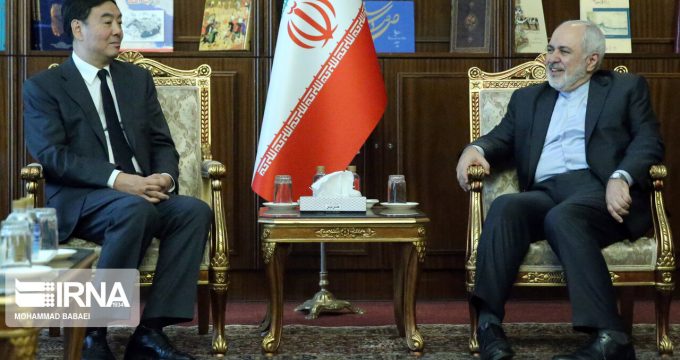 China eager to work with Iran on Middle East peace

In a meeting with Iranian Foreign Minister Mohammad Javad Zarif in Tehran on Tuesday, the Chinese special envoy hailed the strategic relations between China and Iran.

He also highlighted the significance that Beijing attaches to peace and stability in the Middle East, saying his country is willing to continue consultations with Iran to that end.

For his part, Zarif said Iran regards its ties with China as strategic.

Referring to the “Hormuz Peace Endeavor”, an initiative proposed by Iranian President Hassan Rouhani in the most recent session of the UN General Assembly, he added that Tehran welcomes Beijing’s role in ensuring regional peace and stability.

The two diplomats also discussed the status of Iran-China bilateral ties and the major regional developments.

In late August, Zarif paid a visit to China to explore avenues for the expansion of strategic relations between the two nations in talks with senior Chinese officials.

In a meeting in Beijing, Zarif and his Chinese counterpart Wang Yi discussed various issues related to bilateral relations, the latest developments in the implementation of the JCPOA, a roadmap for Iran-China ties in the next 25 years, the security of the Persian Gulf and Strait of Hormuz, and the illegal and unilateral sanctions imposed by the United States on independent countries.

On September 17, Chairwoman of the Money and Capital Market Commission of Tehran’s Chamber of Commerce Farial Mostofi said a $400 billion credit line has been launched for trade between Iran and China.