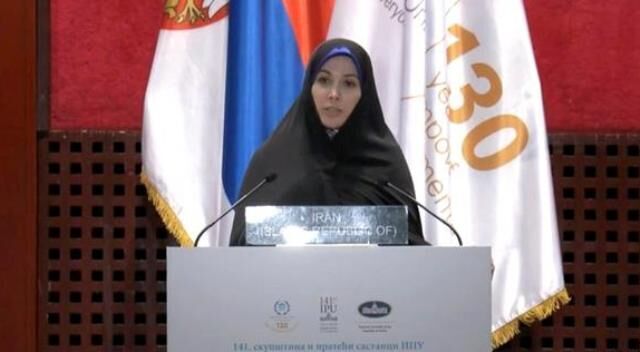 IRNA – Head of the Iranian delegation to Inter-Parliamentary Union (IPU) noted that the US’ use of economic sanctions as a means of achieving its goals has raised serious concerns about the violation of human rights.

Addressing the 141st IPU summit on Sunday, Fatemeh Hosseini said that the world was suffering from disregard for international law and norms, saying that today, among the founders of the recognized institutions of international order, the US believes that it is able to pursue its interests by disregarding and violating the fundamental principles of international law and human rights and for the sake of its own security at the expense of insecurities for others.

Hosseini added that the destructive effects of these sanctions on the lives of ordinary people in countries exposed to these sanctions, such as Iran, include violations of fundamental human rights such as access to adequate food, access to essential medicines, access to health services and so on.

The MP noted that common challenges as a result of non-compliance with international and human rights law can be a matter of cooperation.

Hosseini urged parliamentarians to seek peace on the basis of justice and dialogue among themselves, as well as the exclusion of those who dream of unfinished war and the conflict among civilizations.

Iranian Parliamentary delegation’s four-day visit to Serbia to attend the 141st of Inter-Parliamentary Union (IPU) Summit ended yesterday as the US hostile policies and violation of commitments, as well as weak European cooperation over the Iranian nuclear agreement, were the focus of speeches and meetings of Iranian representatives.

Iranian Parliament Speaker Ali Larijani, who along with a number of parliamentarians, attended and delivered a lecture in the 141st IPU Summit in Belgrade last week, returned to the country on Wednesday evening.

Regarding the history and aims of the IPU it is worth noting that the Union was established in 1889, which was the first permanent institution for multilateral political negotiations for parliamentarians, but subsequently became an international organization for the assemblies of various countries. The national parliaments of 178 states are members of the IPU, and 12 regional parliaments are affiliated members. It has a permanent observer member status at the UN General Assembly.

Fatemeh Hosseini, IPU Assembly, US economic terrorism October 21, 2019
Pres. Rouhani to attend 18th NAM Summit in Baku
Turkey can have bases on own soil, but not in Syria: Iran