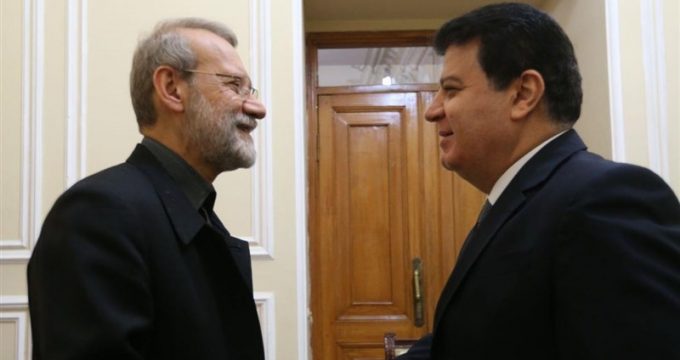 Tasnim – Iranian Parliament Speaker Ali Larijani reiterated the country’s unwavering support for Syria and said the Islamic Republic will always support the security and stability of the Arab nation.

“The protection of Syria’s territorial integrity has always been heeded by the Islamic Republic of Iran and from this viewpoint, it consults with other countries,” Larijani said at a Monday meeting with Syrian Ambassador to Tehran Adnan Mahmoud.

He said undermining the territorial integrity of the Arab country would increase the problems of its people, adding that Iran will support Syria’s security and stability.

The ambassador, for his part, referred to the Turkish invasion of northern Syria, and said the invasion is continuing despite Turkey’s agreement with the United States to stop the attacks.

Mahmoud also expressed his gratitude to the Islamic Republic of Iran for its efforts to help end the invasion and said following the defeat of the US plan in Syria, Turkey’s plan to create a safe zone should be prevented.

In remarks on Monday, Iranian Foreign Ministry Spokesman Seyed Abbas Mousavi highlighted Tehran’s efforts to mediate in the disputes between Turkey and Syria.

The spokesperson said Foreign Minister Mohammad Javad Zarif has had contacts with his Syrian, Turkish and Iraqi counterparts in recent days.

Tehran seeks to bring the views of Ankara and Damascus closer together, he added.

After eight days of the Turkish military operation against Kurdish-controlled areas of northeastern Syria, about 300,000 people have been displaced from their homes and at least 71 people killed, according to the UN and a human rights monitor.

Turkey launched the cross-border operation on October 9 after repeatedly threatening to clear the border area of the Kurdish People’s Protection Units (YPG) fighters, which it considers a “terrorist” group.

On Thursday, Turkey and the US agreed to a temporary ceasefire in the offensive to allow Kurdish fighters withdraw from a planned so-called “safe zone”.

Ankara says the campaign, dubbed Operation Peace Spring, would allow the repatriation of some of the 3.6 million Syrian refugees Turkey hosts on its soil.