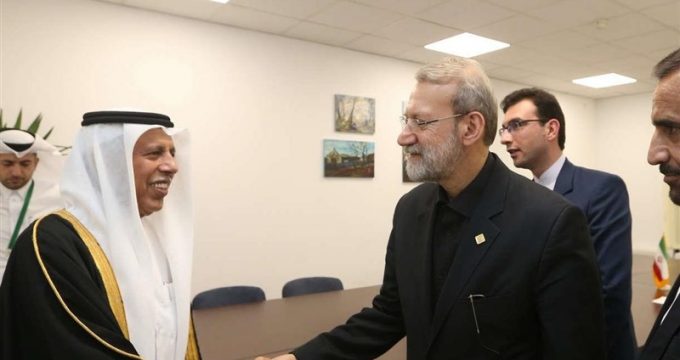 IRNA – Iranian Parliamentary delegation’s four-day visit to Serbia to attend the 141st of Inter-Parliamentary Union (IPU) Summit ended yesterday as the US hostile policies and violation of commitments, as well as weak European cooperation over the Iranian nuclear agreement, were the focus of speeches and meetings of Iranian representatives.

Iranian Parliament Speaker Ali Larijani, who along with a number of parliamentarians, attended and delivered a lecture in the 141st IPU Summit in Belgrade last week, returned to the country on Wednesday evening.

Regarding the history and aims of the IPU it is worth noting that the Union was established in 1889, which was the first permanent institution for multilateral political negotiations for parliamentarians, but subsequently became an international organization for the assemblies of various countries. The national parliaments of 178 states are members of the IPU, and 12 regional parliaments are affiliated members. It has a permanent observer member status at the UN General Assembly.

Our Parliamentary delegation was active this year in the Inter-Parliamentary Union summit, and made a vigorous effort to seize the opportunity presented by the motto of “Strengthening International Law; Parliamentary Role and Mechanisms and Regional Cooperation’s Assistance”.

In addition to attending the General Assembly and the Inter-Parliamentary Council, the MPs were represented on the Permanent Committees on International Peace and Security, Sustainable Development, Finance and Trade, Democracy and Human Rights, UN Affairs, Women Forum, Youth Forum, the Asia Pacific Forum, and Specialist Panels. In addition, our country delegation raised a variety of issues in order to maintain regional security and expand global cooperation. The Speaker of Parliament also seized the opportunity to present Iran’s demands in the Joint Comprehensive Plan of Action (JCPOA) and to explain the Hormuz Peace Plan.

Some of the accomplishments of this multi-day parliamentary trip can be seen from the remarks made by Larijani to reporters on arrival in Tehran. He said that the IPU summit pursued various issues in the committees and the main summit’s venue, the theme and motto of which was how to comply with international commitments and respect for the independence of countries, especially as many countries criticized the US behavior and the disruption that the US has created in world systems and raised good comments in their speeches … So this year’s summit was effective and up to date, and other issues such as environmental issues in other committees were discussed.

In addition to the Speaker’s speech at the Summit, on the sidelines, there was an opportunity to meet with the Speakers of Parliaments and states’ officials at the summit to discuss various issues with one another. During the visit, Larijani also met with more than 15 speakers of parliament and officials from different countries to pursue specific goals of activating parliamentary diplomacy.

One of Larijani’s most important meetings was his meeting with Serbian Prime Minister Ana Brnabić on the sideline of the meeting, focusing on the importance of boosting economic ties between the two countries, tourism, scientific and cultural cooperation and establishing a joint economic commission. Larijani also criticized Europe’s inefficiency in the JCPOA, commenting on Iran’s nuclear deal and the JCPOA, saying, “The US is bullying on various issues and Iran is responding, while the EU has not taken a key step regarding the nuclear deal.

The Serbian Prime Minister’s remarks also indicated the eagerness and enthusiasm to cooperate with Iran, and she praised the Islamic Republic’s rise of power against sanctions, expressing her country’s interest in cooperating with Iran in all areas and noted that Serbia has experienced the sanctions and its problems, so we will do whatever we can to help Iran.

But one of the important meetings closely related to the JCPOA and developments in the region was Larijani’s meeting with German Parliament Vice-Speaker on Tuesday, October 15. In addition to the European side’s commitments to the nuclear deal, the meeting also touched on issues such as Turkey’s military invasion of Syria and its destructive consequences, the need for a more active role by Berlin, the conditions for effective mediation between Tehran and Riyadh, etc.

Overall, the four-day IPU Summit created an opportunity for Iranian representatives simultaneously to work to promote mutual cooperation, especially in the economic field, with the host country and other representatives of the present countries, while boosting the Islamic Republic of Iran’s stances on regional and international problems; problems that can be significantly mitigated by the timely decision-making by lawmakers present at the summit, and to witness the creation of effective international commitments and, more importantly, the implementation of global commitments to the path of peace and progress.