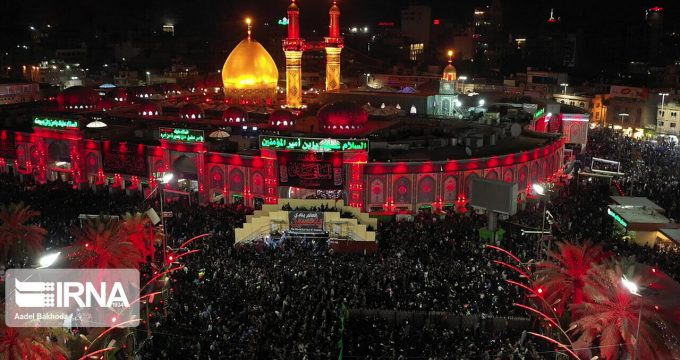 AP | QASSIM ABDUL-ZAHRA and HADI MIZBAN: Millions of pilgrims made their way on foot to the Iraqi city of Karbala on Saturday for the Shiite pilgrimage of Arbaeen, regarded as the largest annual public gathering in the world.

The commemoration marks the 40th day following the death of a Shiite saint in the 7th century and included more than 2 million Iranians and other Shiites from abroad. Militias patrolled roads leading into the city and escorted Iranian pilgrims from the border, hiking up security for processions that have previously been targeted by Sunni militant groups with bloody bombings.

This year’s Arbaeen ceremonies take place amid widespread anger in Iraq’s Shiite south over the government’s heavy crackdown on protests that erupted earlier this month against unemployment, corruption and government mismanagement. The demonstrations raged across Iraq for seven days and most prominent among the protesters were young Shiites, unleashing their frustration with the Shiite-led government in Baghdad.

The security crackdown, which killed more than 100 and wounded thousands, put down the protests last week, but a new round of demonstrations has been called for Oct. 25.

The political turmoil surfaced in the Arbaeen ceremonies. Followers of populist cleric Muqtada al-Sadr marched toward Karbala chanting, “No to America, no to Israel, no to corruption” and “Baghdad is free, corruption must go!”

In a message marking the day, Prime Minister Adel Abdul-Mahdi vowed to “confront with strength and determination all forms of corruption and achieve justice.” The 77-year-old premier, who took office last year, has promised to address protesters’ demands but has also told them there is no “magic solution” for Iraq’s accumulated problems, including high unemployment, corruption, dilapidated public services and poor security.

Pilgrims streamed toward Karbala on foot from the cities of Najaf, 70 kilometers (45 miles) away, Baghdad, 90 kilometers (55 miles) to the north, and other places farther afield, resting along the way in tents lined with foam mattresses and fleece blankets.

The pilgrimage, known in Arabic as the Ziara, marks the anniversary of the 40th day of mourning following the 7th century death of the Prophet Muhammad’s grandson Hussein at the hands of the Muslim Umayyad forces in the Battle of Karbala, during the tumultuous first century of Islam’s history.

Hussein was seen by his followers as the rightful heir of the prophet’s legacy. When he refused to pledge allegiance to the Umayyad caliphate, he was killed in the battle, cementing the schism between Sunni and Shiite Islam. Hussein’s half-brother Abbas was also killed in the battle.

Sunnis outnumber Shiites by a wide margin among the world’s estimated 1.5 billion Muslims, and Shiite rituals are far less known.

But Arbaeen — Arabic for the number forty — draws far more pilgrims than the hajj in Saudi Arabia, a pilgrimage required once in a lifetime of every Muslim who can afford it and is physically able to make it.

The hajj is considered one of the five pillars of Islam and an obligation for all Muslims — Sunni and Shiite. The Ziara is voluntary and holds little significance in Sunni tradition.

In recent years, the Iraqi government says Karbala received 10-20 million visitors during the event. Saudi authorities regulate the hajj tradition tightly, driving up costs for pilgrims and depriving it of some of the spontaneity seen in the Ziara. For many Muslims who cannot afford to go on the hajj or cannot get the Saudi visa, the Ziara is a satisfying alternative.

In neighboring Shiite-majority Iran, Arbaeen is a national holiday. Thousands in Tehran marched toward a nearby town south of the capital to mourn at the shrine of Shiite saint Abdul Azim.

Iran’s deputy interior ministry, Hossein Zolfaghari said that more than 3.4 million Iranians traveled to Iraq and 2 million of them have returned.