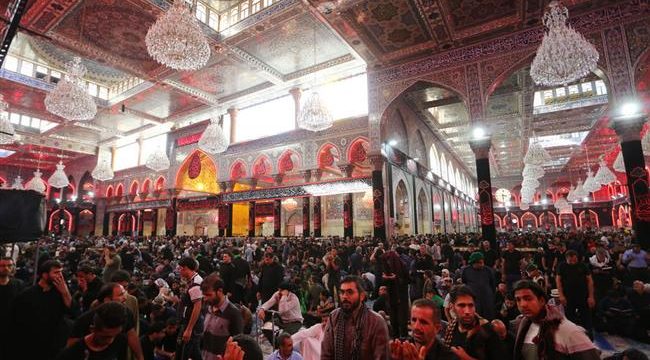 Press TV – Millions of pilgrims, including a record number of Iranians, have gathered in Iraq’s holy city of Karbala to commemorate Arba’een, the 40th day after the martyrdom anniversary of Imam Hussein, the third Shia Imam.

Among the pilgrims, which usually number 20 million from around the world every year, many arrive in Karbala after trekking about 70 kilometers northward from the holy city of Najaf in a symbolic gesture honoring Imam Hussein.

Pilgrims enter the holy cities of Najaf and Karbala up to two weeks before Arba’een. This year’s Arba’een falls on Saturday, October 19.

Fazli praised what he described as “good cooperation” on behalf of Iraqi officials in facilitating the process, adding that all branches of the Iranian government had also contributed to managing the huge pilgrimage.

Foreign pilgrims from other countries also participate in the event, with tens of thousands entering Iraq notably from countries such as Pakistan, Afghanistan, Azerbaijan, Turkey and Lebanon.

The pilgrims are greeted by the generous hospitality of the Iraqi people, who provide them with food, water, transport and accommodation needed for the journey.

Imam Hussein was martyred along with dozens of his companions during a last-stand battle against the tyrant of the time, Yazid I, more than thirteen centuries ago.

The martyrdom of Imam Hussein has turned into a symbol of righteous revolt and social and political reform.

Imam Hussein is a highly-venerated figure not only among Shia Muslims but also among Sunnis and people of other faiths.

Many observers have highlighted that despite Arba’een being the world’s largest annual peaceful gathering on earth, there has been substantially little attention from mainstream media to the major ceremony.

“The biggest gathering in the world is taking place these days, but it receives the least possible media coverage,” wrote media activist Amir Abbas Sadegi for Iran’s ISNA news agency on Friday.

Earlier this month, Arab media outlets reported a US-backed plan seeking to influence recent anti-corruption protests in Iraq in a bid to spark instability in the country.

Observers believe the timing of the provocations signals that foreign-backed elements seek to undermine the Arba’een processions, specifically by fueling antagonism towards Iran.

The protests, however, have largely receded since last week.

On the official Twitter account of Leader of the Islamic Revolution Ayatollah Seyyed Ali Khamenei, a posting last week said an enemy plot seeking to “sow discord” between the two nations of Iraq and Iran will fail.

Given the high number of Iranians participating in the annual event, Arba’een has consequently turned into a symbol of unity between the Iraqi and Iranian people, who both deeply venerate Imam Hussein.