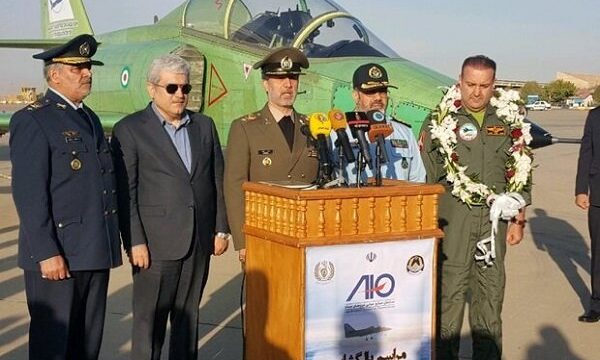 MNA – Minister of Defense Brigadier General Amir Hatami said Thu. the Iranian developed ‘Yasin’ fighter jet has proved the ineffectiveness of US sanctions on the country.

He made the remarks on Thu. in an unveiling ceremony of first Iranian-made fighter jet ‘Yasin’, which was officially unveiled at the Noje airbase in Hamadan this morning.

“This sophisticated and advanced fighter jet was manufactured by domestic experts and conveys a clear message to the global Arrogance that sanctions have had no effect on the Islamic Republic of Iran,” Hatami said.

“The development of Yasin fighter jet has provided proper conditions for the materialization of objectives of resistance economy with a focus on ‘Boosting Domestic Production’ as emphasized by the Leader of the Islamic Revolution,” he added.

Islamic Republic of Iran is one of the few countries in the world that, while under sanctions, has managed to design and manufacture advanced training aircraft by relying on its most experienced and talented youth in cooperation with knowledge-based firms and private sector companies , Minister of Defense Hatami added.

Yasin was designed and built by Air Force Specialists of the Armed Forces and the Air Force of the Islamic Republic of Iran and is intended to be used as a training aircraft for training fighter pilots.

According to Army Public Relations, the infantry training aircraft made its first official flight over the Noje base this morning after undergoing final tests.

Yasin is 12 meters long, four meters high and five and a half tonnes of cargo weight under operational take-off conditions and can fly up to 12 km. It is equipped with a 7,000-pound turbo-jet powered jet engine, which is the world’s leading jet fighter engine.