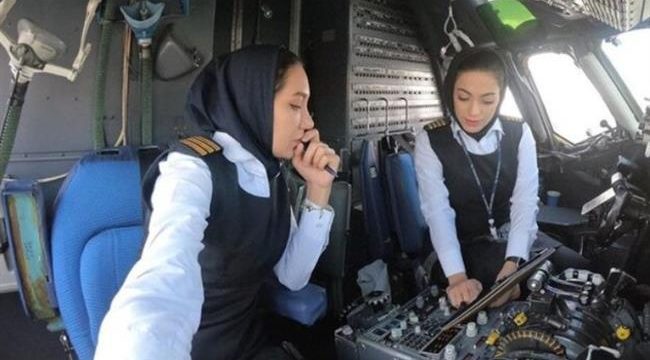 Press TV – Reports in the Iranian media shows a female captain and her co-pilot have flown a passenger plane, a first in the history of the country’s aviation industry.

The reports published on Tuesday showed photos of the two pilots taken from the social media showing them before and after the two-way flight between the capital Tehran and the second largest city of Mashhad, located east of the country.

The pilots were identified as Neshat Jahandari and Forouz Firouzi, both of them apparently working for low-budget airline Zagros, although there was no official confirmation from the carrier.

The reports said that it was the first time in Iran’s aviation history that female pilots had taken control of a flight totally on their own.

“My feelings were unexplainable. This historic incident was unprecedented in Iran’s aviation industry, and for a first time a domestic flight in Iran was carried out by two women,” said Jahandari, 29, who became captain just two months ago after working as co-pilot for five years.

There was no official statement detailing the aircraft flown by the pilots. However, information released on social media about the weight of the plane and the number of passengers travelling suggested it was one of several MD-80s operated by Zagros Airlines.

Unverified reports suggest Iran has fewer than a dozen female pilots. Flag carrier Homa allowed them only last year when a former female chief executive said it had become a policy of the company to hire more women for key positions.

Female pilots recruited by Homa, known internationally as IranAir, have yet to take control of a plane as they continue to work as co-pilots.