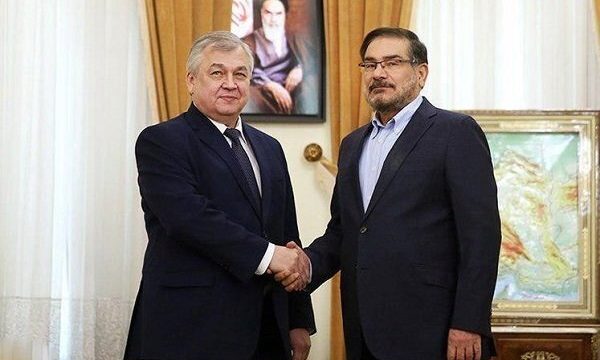 Iran’s response to those involved in SABITI incident will be harsh: Shamkhani

MNA – “Iran will give a harsh response to those involved in Iranian oil tanker, SABITI, in the Red Sea, those who seek to create a new wave of tension in the region,” Secretary of Iran’s Supreme National Security Council Rear Admiral Ali Shamkhani said in a meeting with Russia’s special envoy on Syria Alexander Lavrentiev where the two sides discussed the latest regional and international issues.

In this meeting, the two sides underlined reinforcement of mutual ties in political, defense, security and economic sectors. They also discussed recent tensions in the region including military operations of Turkey in northern parts of Syria.

Addressing the recent incident occurred for the Iranian oil tanker in the Red Sea, Shamkhani named sowing insecurity in international waterways as one of the main reasons for regional crises.

He noted the US’ scenario for reviving ISIL and sowing insecurity in west Asia underscoring collaboration among regional countries for defusing such plots.
“Resolving tensions in Idlib must be among top priorities in fight against terrorism,” he said.

Shamkhani also reiterated Iran’s disagreement with Turkey’s operations in Syria adding that regional unrest must be resolved only through diplomacy between Syrian-Syrian and Yemeni-Yemeni parties.

The Russian envoy, for his turn, admitted that Iran-Russia cooperation can prevent development and revival of terrorism and will provide stability and security in the region.