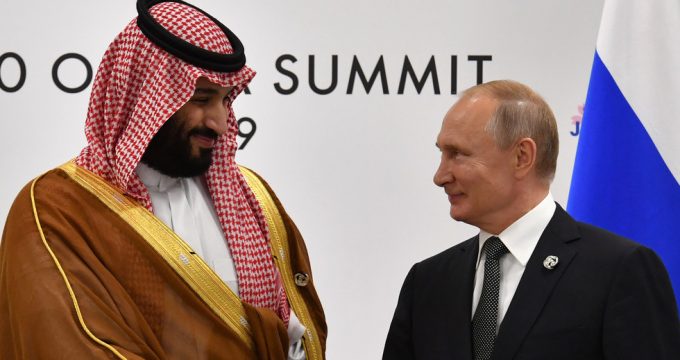 Putin visits Saudi Arabia for first time since 2007 – but can Russia be friends with EVERYONE in the Middle East?

Putin arrives in Saudi Arabia on Monday, his second visit to the country after his 2007 trip. Just days earlier, Riyadh ignored his proposal (though apparently made in jest) to buy Russian air defense systems, and even more recently, approved the United States’ deployment of about 3,000 troops on its territory, including fighter squadrons, an air expeditionary wing and air-defense personnel.

The signs are clear that Riyadh remains firmly in the orbit of Washington’s influence, at least when it comes to security and defense. But Moscow doesn’t seem to hold it against Riyadh – in fact, relations with the Saudis have never been better. Putin has been seen chatting cordially with Saudi Crown prince Mohammed bin Salman at international meetings, and has spoken about his personal rapport with both MBS and with the Saudi king himself. The friendship has been well echoed in economics: trade turnover, while still comparatively low, is on a quickening rise (it grew by 15 percent in 2018 and by 38 percent so far in 2019), there’s talk of a $1-billion joint oil facility, and further investment deals are expected to be inked this week.

At the same time, Moscow is an ally of America’s public enemy number one: Iran. Saudi Arabia has blamed the regime in Tehran for strikes on two of its oil facilities last month, and hosts US troops on its soil to deter any supposed Iranian aggression. Riyadh is embroiled in a devastating military conflict against Iranian-backed Houthi rebels in Yemen, and is on the opposite side to Moscow in the Syrian civil war, where the Saudis arm anti-government rebel militias, while the Russians aid the government of Bashar al-Assad.

Time for a breakthrough?

Yet bizarrely, Russia enjoys better relations with Saudi Arabia now than it did two decades ago, when Putin inherited a country wracked by economic crises and too focused on its own problems to take a decisive role on the world stage. Even as both countries clashed by proxy in Syria, Saudi King Salman visited Moscow in 2017 to talk settlement of the ongoing conflict.

Russia’s footprint in the Middle East is evidently growing, and the Saudis are recognizing the opportunity to align with a new major player.

“What has changed during the past few years is the Russian influence in the Middle East. It has increased a lot, and lots of traditional US allies have been weaving relations with Russia over the past few years and accepting Russia as a player in that region,” says Ammar Waqqaf, Founder & Director of Gnosos, an organisation expressing stakeholder opinion in Syria & the Middle East. For Saudi Arabia in particular, there’s growing partnership within OPEC+ in keeping the oil market stable – something Putin himself has just reaffirmed his commitment to, in a pre-visit interview.

No one expected that the Russian influence in the Middle East would increase but, probably because of the Syrian crisis, it did.

“Riyadh’s relationship with America and with the Congress specifically is already very bad” after the resonant murder of Washington Post columnist Jamal Khashoggi in a Saudi consulate in Turkey. “I don’t think the Saudis would risk making it even worse by going ahead and buying these weapons.”

The defense system the US has created is limited. It has natural limitations and vulnerabilities and one of them, a very important one, is that the system is not under the Saudis’ direct control – it’s first and foremost under the control of the US.

Everyone’s friend, but not a mediator

Experts agree that Russia, being a friend to just about everyone in the Middle East, is in a perfect position to mediate the daggers-drawn situation between Iran and Saudi Arabia. But Putin has just ruled out the “unrewarding” role of middleman – apparently preferring not to wade into regional politics where they don’t directly impact Russia and its opportunities.

“Since we maintain very friendly relations with all the countries in the region, including Iran and the Arab states such as Saudi Arabia and the UAE, we could certainly help relay some messages between the parties, so they could hear each other’s position. But, since I personally know the leaders of these countries, I am perfectly sure that they have no need for any advice or mediation,” he said, in the interview released on Sunday.

The most he is willing to do is to “present some ideas from a friend’s perspective,” he said.

The amicable dealings between Moscow and Riyadh could be baffling for a casual observer, especially if compared to Washington’s habit of choking off dissenting positions with economic pressure. But, in an era where the US, particularly with regard to Iran, sees diplomacy as a zero-sum, ‘with us or against us’ game, Russia has courted multiple, often opposing, sides at the same time – and, as its Middle East ties show, has excelled at it.

Putin has boasted of deepening his country’s military ties with Turkey, shipping the S-400 to Ankara earlier this summer and stating last month that “negotiations are underway on promising new weapons.” At the same time, Russia backs the Assad government in Syria, which fights Turkish-armed rebel groups.

Moscow manages, without much apparent effort, to enjoy warm relations with both Israel and Iran, despite Israeli Prime Minister Benjamin Netanyahu’s continually labeling Iran a nuclear threat and the latter’s calls for the annihilation of the Jewish state.

What Putin therefore brings to the table is options for the Saudis – Russia now presents a viable and stable partner for Gulf nations.

Riyadh, in its dealings with powers outside the Middle East, has shown to be good at compartmentalizing and keeping things professional – and Putin appears equally well-versed in this approach. Moscow’s primary goal is to find friends for mutually-beneficial partnerships, not allies to gang up on rivals together.

And, while geopolitics doesn’t seem to pose any obstacles for the two nations’ ties, the situation is still an indication that the influence Washington has been exerting in the region could be starting to wane.

“The US is no longer the power it used to be in the Middle East,” Rizk noted. Given that, it “would be wise for Mohammed Bin Salman maybe not to put all his eggs in the American basket,” he concluded.

So, while talk of oil prices and investment deals may be a sure thing to expect this week, don’t rule out a move towards a deeper partnership – even though by Western diplomatic standards, Riyadh and Moscow’s different stances and allegiances make it seem impossible.