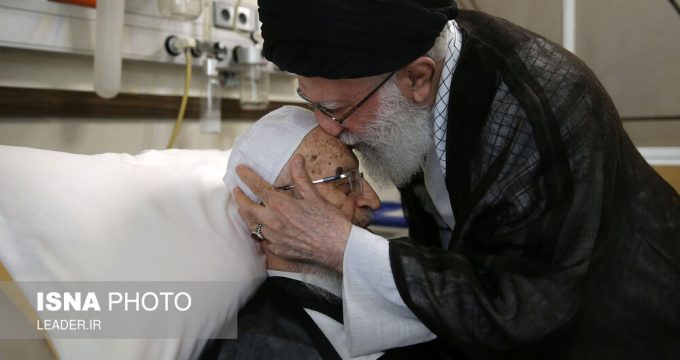 During the visit, the Leader highlighted Ayatollah Makarem Shirazi’s important role in Qom seminaries and wished him a full and speedy recovery, Fars reported.

Earlier, the office of Ayatollah Makarem Shirazi announced that the cleric had been hospitalized for some health conditions, adding that his general health is good.

According to his website, Ayatollah Makarem Shirazi was born in the year 1924 in the city of Shiraz into a religious family who were well known for their great level of spirituality and noble ethical traits.

The eminent scholar finished his elementary school studies in Shiraz and due to his eagerness to learn, his powerful memorizing capabilities and other great talents, he was regarded as one of the extraordinary students from amongst his fellow classmates and because of this, was able to complete two years of studies in one year.

The conditions that existed in Iran in those days obligated this young man – who possessed such a talent and great aptitude to choose the path of university studies to increase his knowledge and attain the higher (material) levels of secular studies.

However through the hand of fate and the blessings of the Maintainer of the Universe and his own internal desires, this young man developed an attraction to becoming better acquainted and delve deep into the genuine teachings of Islam, especially since after the spring of 1937 (just after he finished his primary school), the Islamic seminaries went through a major transformation and had taken on a completely new form.