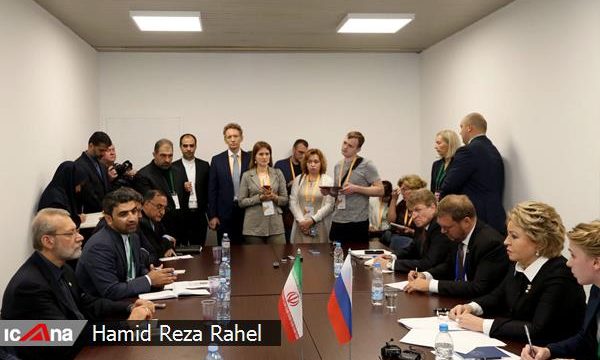 Speaking in a meeting with Valentina Matviyenko, Chairwoman of the Russian Federation Council held on the sidelines of the 141st Inter-Parliamentary Union (IPU) Assembly, Larijani said negotiations between two countries have experienced great development.

Referring to Trump’s abnormal behaviors in the international arena, he called world leaders to trust to one another in order to properly deal with Trump’s misbehavior.

Matviyenko, for her part, said Russia has stable and principled stance toward Iran.

Russia is against violating Iran nuclear deal since it will bring various damages, she added.

She noted the fact that Russia has explicitly slammed unilateral sanctions against Iran.

No threat will make Iran return to negotiating table, she reiterated.

Iran has played effective role in drawing a solution for bringing back peace and truce to Syria, Matviyenko said appreciating Iran’s efforts.

The Inter-Parliamentary Union is a global inter-parliamentary institution established in 1889 by Frédéric Passy and William Randal Cremer. It was the first permanent forum for political multilateral negotiations.

The IPU is the global organization of national parliaments promoting democratic governance, institutions and values and working with parliaments and parliamentarians to articulate and respond to the needs and aspirations of the people.