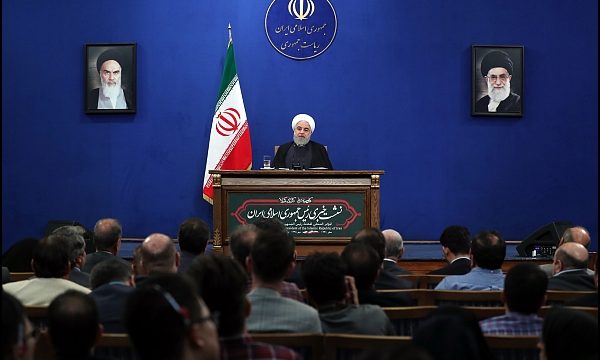 Press TV – Iranian President Hassan Rouhani says the country is ready to restart nuclear talks with the member states of the P5+1 group if the United States removes all sanctions it has re-imposed on Iran after Washington quit a landmark nuclear deal with Tehran last year.

Rouhani made the remarks in a press conference with domestic and international media outlets in Tehran on Monday.

Answering a question about the possibility of talks between Tehran and Washington if the impeachment of US President Donald Trump leads to his dismissal and a new president takes office at the White House, he said Iran’s problem is not to sit with a US president for talks, but “our main concern is whether our interests are met through negotiations or talks are merely for show.”

“Trump’s personal characteristics have made it very difficult to talk to US,” Iran’s chief executive said, adding that this is not just a problem for Iran, but for the entire world and all world leaders have pointed this out.

“If sanctions are removed based on our demands, we are ready to take part in talks within the framework of P5+1,” he noted.

Trump is a stern critic of the nuclear accord, officially known as the Joint Comprehensive Plan of Action (JCPOA), which was clinched between Iran and the five permanent members of the UN Security Council plus Germany in 2015. Under the agreement, nuclear-related sanctions against Iran were lifted in exchange for curbs on Tehran’s nuclear program.

Trump unilaterally withdrew the US from the deal in May 2018 and unleashed the “toughest ever” sanctions against the Islamic Republic in defiance of global criticism in a bid to strangle the Iranian oil trade.

In response to the US acts, Tehran has so far rowed back on its nuclear commitments three times in compliance with articles 26 and 36 of the JCPOA but stressed that its retaliatory measures will be reversible as soon as Europe finds practical ways to shield the mutual trade from the US sanctions.

Iranian Foreign Minister Mohammad Javad Zarif in September slammed the latest US move to impose a fresh round of sanctions on the Islamic Republic, saying such restrictions would make future negotiations with Tehran impossible.

“They want to make the negotiations impossible… want to make a change impossible,” Zarif said in an interview with China Global Television Network (CGTN), adding, “It’s very difficult for (the US president) and his successor to remove [sanctions imposed on Iran].”

Elsewhere in his presser, the Iranian president said, “Today, I firmly announce that plots [hatched] by the US, global arrogance and Zionism as well as reactionary regimes in the region to harm the Islamic establishment have been foiled.”

“They all admit that we have passed the critical situation through wisdom, patience and resistance,” he added.

Asked about Turkey’s ongoing military operation in Syria’s northeastern Kurdish regions, Iran’s president said Ankara’s Syria offensive is not a good development for people of the region, the Kurdish people in Syria and the country’s government.

“We recognize Turkey’s concerns about northern Syria, but we do not approve of the way they have chosen to deal with them,” Rouhani said, emphasizing that there are better ways for Turkey to achieve its goals there.

Rouhani said he has told Turkish President Recep Tayyip Erdogan that “the best solution to Turkey’s concerns about northern Syria is the deployment of the Syrian army in that region.”

“Turkey has promised to respect territorial integrity of Syria and leave the country after operation is over,” Iran’s president said, stressing that so far, the outcome of Turkey’s operation in Syria has not been positive.

Rouhani added that the main goal in Syria should be fighting terrorism, paving way for return of refugees and holding free elections.

Turkish military forces and the Turkish-backed militants launched a cross-border invasion of northeast Syria in a declared attempt to push Kurdish militants from the so-called People’s Protection Units (YPG) away from border areas. Ankara views the US-backed YPG as a terrorist organization tied to the homegrown Kurdistan Workers’ Party (PKK) militant group, which has been involved in armed separatism in Turkey since 1984.

In a televised speech on Sunday, the Turkish president said threats of sanctions and arms embargoes by Western powers will not halt his country’s cross-border military offensive against Kurdish militants in Syria’s northeast.

“After we launched our operation, we have faced threats like economic sanctions and embargoes on weapons sales. Those who think they can make Turkey turn back with these threats are gravely mistaken,” Erdogan said.