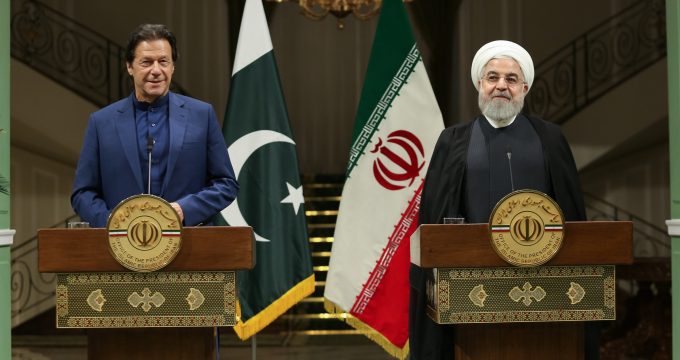 SHANA — Iranian President Hassan Rouhani said investigations would continue to determine who were behind the Friday missile strike on an Iranian oil tanker in the Red Sea.

In a joint press conference with Pakistan’s PM Imran Khan, Iranian President Hassan Rouhani underlined the significance of holding talks for resolving regional issues, adding, “It would be a grave mistake for a country to think they could create insecurity in the region without a response.”

According to Mehr News, the President said, “In our meeting, we also expressed our concerns about the safety and security of oil tankers, especially what happened to the Iranian tanker on Friday in the Red Sea”.

Expressing gratitude for Khan’s visit to Tehran, Rouhani said, “The issues we discussed today are of high importance for the region and international relations.”

“I explained the danger of the Zionist regime to the Pakistani PM,” he said.

“We also discussed cruel US sanctions against Iranian nation noting that they are ‘economic terrorism’,” he added.

“We also conferred on possible ways to put JCPOA on its previous track and having it implemented,” Rouhani said.

He continued, “Iran and Pakistan enjoy profound strategic relations and both parties believe that these ties need to continue”.

“We also presented the leads that we have acquired on the issue and stressed that we will continue our investigations until we reach the final conclusion,” said Rouhani.

He added, “If a country thinks that it can create insecurity in the region and not receive any response, it is gravely mistaken”.

Dr. Rouhani continued, “Mr. Imran Khan made some points about the critical region of Persian Gulf, which we approve”.