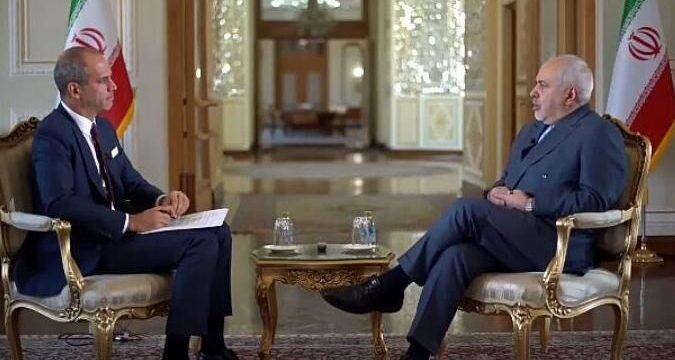 IRNA – Iranian Foreign Minister Mohammad Javad Zarif stressed the fact that Iran has never left the negotiation table, saying the country has not closed the doors to negotiations.

Speaking to the Turkish international news channel-TRT World, Zarif said on Friday evening “We have never closed the door to negotiations and we never left the table.”

“The table is there now there are six countries and one international organization sitting around that table used to be seven countries,” he added.

“We never left the negotiation table the one seat that is empty is not Iran’s seat there is that of the United States,” he reiterated.

Elaborating on Iran’s reduction of some commitments under the nuclear deal after US withdrawal, Zarif said “When we negotiated this deal we negotiated it with open eyes not based on blind trust and that’s one of the beauties of this deal.”

“That’s why I believe this deal cannot be improved extensively and one of the provisions that we put into the deal was that if one side violated the deal what would the others do.”

“For P5+1 they had a recourse if Iran violated the deal they could have taken us back to the Security Council and used the snap back mechanism that is in the deal but it was a mutual understanding so what would Iran do if they failed to observe the deal,” Iranian top diplomat said.

The recourse that we have in the deal is that after a procedure we could stop implementing some of our commitments now we took that procedure we started that procedure on the 8th-10th May 2018 we gave the Europeans a full year to comply that is to implement their own obligations.”

He went on to say “We don’t want Europe to implement the US obligations as Europe in the deal has independent obligations inside the nuclear deal and also in the commitments they made after the US left.”

“In November 2018 I wrote to the Europeans actually to all P4+1 that we have exhausted the procedure and now we have to take our own remedy so we’re not violating the deal,” Zarif noted, adding that Iran is using the remedies inside the deal.

“There is a religious decree or Fatwa by the Leader against it and also that nuclear weapons will not augment our security so this is a very clear answer that the Leader has given including in his meeting with Prime Minister Abe, he repeated that we do not want to use nuclear weapons or even to develop them and Prime Minister Abe repeated that statement in his address before the General Assembly.”

“The fact is that we have recovered over the last one year some 40% of our currency value and we are back in the positive growth territory.”

“We’ll be reducing inflation but sanctions have imposed heavy burden on the Iranian people and that is why we believe sanctions are war.”

When TRT reporter asked Zarif why he always repeat the word economic terrorism attributing to US measures against Iran, he said “Because Secretary Pompeo has said publicly and that is a Newsweek headline ‘if Iran wants its people to eat it has to follow what the US says.”

“Now read the classical definition of terrorism in any case book, in any law, in any law dictionary even Google it, it says coercion or use of violence against civilians for political purposes to achieve political objectives now it is clear for the United States and the Secretary of State is saying it if Iran wants its people to eat so that’s coercion against ordinary people.”

“It has to change its policies so it’s coercion against innocent civilians in order to change the policy that’s terrorism in fact because it borders on starvation that’s a war crime so Secretary Pompeo should in fact hire a good lawyer,” Zarif noted.

“The only possessor of nuclear weapon in this region, the aggressor against its neighbors with ambitions over the entire region with policies that have undermined development and peace in the region now it’s attacking not only Syria and Lebanon but also its aggression against Iraq so that’s the biggest threat to the entire region and to the world peace.”

“We deal with it by defending ourselves and by trying to expose the malicious projects of this regime,” he stressed referring to situation in Palestine at daily attacks on Palestinians, aggression against Palestine against Gaza, West Bank, Lebanon, Syria, Iraq and possession of nuclear weapons.

“You don’t need to make or frame a wrong image of the region by taking rather cartoonish photographs to the general assembly, realities are there and realities have to be judged now.”

“Israel cannot provide security for itself, ” he reiterated.

“Today I’m saying what we need is inter-Syrian dialogue revised constitution and hopefully in 2021 when the time comes for election the next election when I spoke to the Foreign Minister of Turkey it was probably before the previous election now is the next election and we have to prepare for it.”

He added “I think the formation of the constitution committee is a very important first step we should follow it with serious measures including moving toward less tension.”

“We have offered better options to our Turkish friends like the Adana agreement.”

“There is an Adana agreement between Turkey and Syria which is still valid we can help bring together the Syrian Kurds, the Syrian government and Turkey so that the Syrian armed forces can guard the border with Turkey together with Turkey.”

“Syrian Kurds and the Syrian government can in fact reach an understanding with Turkey so that the borders would be secure,” Zarif said adding that YPG [People’s Protection Units] does not represent the Syrian Kurds.

“I do not believe that by invading another country our Turkish friends will be able to get security for themselves,” he said.

“I do not believe that increasing violence will bring about the political solution that both Iran and Turkey along with Russia have tried to achieve in Syria,” he reiterated.