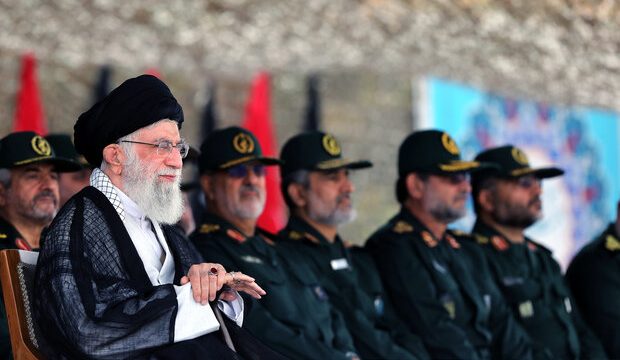 With their hostile behaviour, Americans made IRGC more dignified

Khamenei.ir – This morning October 13, 2019, a graduation ceremony was held for the student officers and guards trainees at Imam Hussain (a.s.) Academy with the Commander-in-Chief of the Armed Forces—Ayatollah Khamenei— in attendance.

The following are the excerpts of the statements his eminence made at this ceremony:

“Today, the IRGC is dignified both inside and outside the country, thanks be to God. The enemies have contributed to creating this dignity. With violent, aggressive and hostile behaviour, the Americans increased the dignity of the IRGC. The enemies of God show hostility to God’s servants, and this hostility makes God’s servants more reputable and estimable.”

“A permanent lesson before the eyes of the IRGC is the Quranic verse: “Mobilize your (defensive) force as much as you can to frighten the enemies of God and your own enemies.” {the Quran; 8:60}. Investigate to find out what you need in all military and intelligence arenas. During the tyrannical Pahlavi regime, we were dependent, backward and unknowledgeable in terms of military equipment. The military equipment of the IRGC must be advanced and up to date; you should invent and manufacture them yourselves.”

“The importance of Arbaeen since its beginning was as much as today. The first Arbaeen was the powerful media of Ashura. Those forty days were the days when the logic of Truth reigned among the dark world of Bani-Umayyahs and Bani-Sofyanis. Ahlulbait shaped an upheaval in a forty-day movement. Today, too, Arbaeen walk is a stentorian call and an unprecedented media in the complex and propagandized world. It is unprecedented in the world to see a huge crowd move toward that source[ Imam Hussain’s Shrine]. You rightly said that Hussein(a.s.) brings us together. This movement should increasingly expand and deepen.”

“We have made great strides since the beginning of the Revolution; there are many shortcomings and difficulties, but the movement which has taken place to this date is amazing. What is the direction of this movement to continue? Imam Hussein has specified the direction of it:
Imam Hussein (a.s.) said: O’ people! The Prophet of Allah (peace be upon him) said, Whoever sees a tyrannical ruler– who regards what God has forbidden (haram) lawful (halal), breaks the covenant of God, opposes the tradition of the Prophet of God and commits sins and invasive behaviour among the people– and he/she does not rise up with words and actions against this ruler, it is the right of God to take him/her where He takes that ruler. (Tabari history, v.4, p.304)”

This item is being updated…