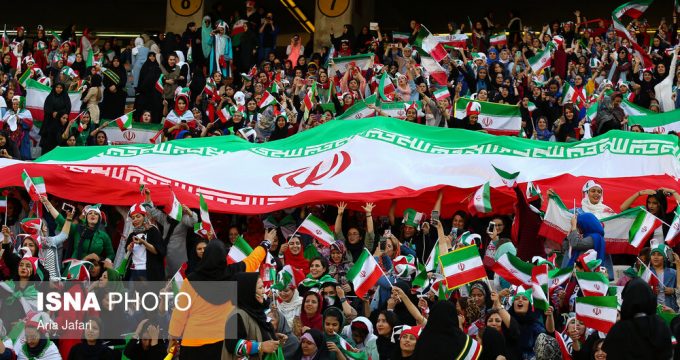 Al-Monitor | Saeid Jafari: “I just cannot believe how much we shouted and cheered,” Maryam, 27, told Al-Monitor as she walked out of Tehran’s Azadi Stadium. “I even cried at some point; I was so moved.”

On Oct. 10, the Iranian national soccer team scored 14 goals against the Cambodian team in the qualifier for the World Cup 2022, which will take place in Qatar. But the excitement of Maryam — and the international media frenzy — was not because of this impressive score; it was due to the fact that Iranian women were able to watch the game freely for the first time in decades.

Iranian women have been barred from soccer and sports stadiums for nearly 40 years, except for sports events for females. Clerics and conservative politicians argued that it was against Islam for women to sit together with men and watch men in shorts play sports.

2022 World Cup in Qatar, Iranian women, Iranian women in sports stadiums, Tehran Azadi Stadium, Women rights in Iran October 13, 2019
Daughter of detained British-Iranian is reunited with father in UK
Russia will pull out of Syria if Damascus decides troops have to leave – Putin