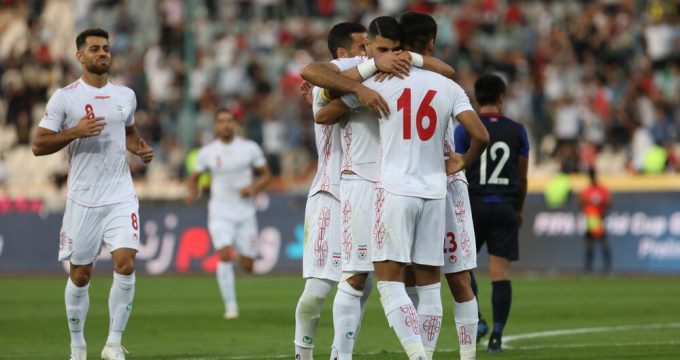 Iran too strong for Cambodia at World Cup qualifier

It’s Team Melli’s second successive win in the competition after a 2-0 win over Hong Kong in September in Group C.

Iran scored seven goals in the first half in Tehran’s Azadi Stadium, where the Iranian women attended an international match for the first time after many years.

Ahmad Nourollahi opened the scoring in the 5th minute and Sardar Azmoun made a hat trick. Hossein Kananizadegan, Mehdi Taremi and Karim Ansarifard also scored for Iran in the first half.

Just two minutes after the interval, Iran goalkeeper Alireza Beiranvand brought Cambodia’s player down in the penalty area and the referee awarded the visiting team a penalty.

Beiranvand save the penalty.

Ansarifard scored three more goals in the second half and Taremi also scored one goal 10 minutes after the break.

Marc Wilmots’s team will meet Bahrain in Manama on Tuesday.

Iran have been drawn in Group C alongside Iraq, Bahrain, Cambodia and Hong Kong.

The eight group winners and four best runners-up will advance to the AFC Asian Cup China 2023 Finals and the final round of qualifying for the FIFA World Cup Qatar 2022.

The next best 24 teams from the second round of the joint qualifiers will compete in a separate competition for the remaining 12 slots in the 24-team AFC Asian Cup China 2023.