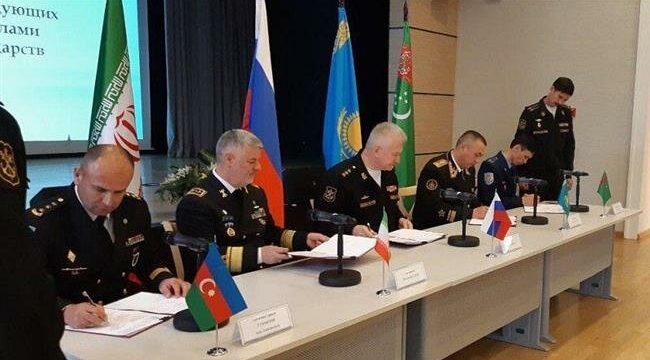 Press TV – Iran and other Caspian Sea littoral states have inked a joint military agreement covering cooperation in such areas as security, training, technical work and search and rescue operations.

Iranian Navy Commander Rear Admiral Hossein Khanzadi signed the agreement in the Russian city of Saint Petersburg along with his Russian, Azerbaijani, Kazakh and Turkmen counterparts on Friday.

The Iranian navy chief said that a joint military exercise planned between Russia and Iran will be held in the near future.

“We hope that the exercise can take place in the Indian Ocean until the end of this year,” he said, referring to the end of the Persian calendar, which corresponds with mid-March next year.

“When two or more countries hold a military exercise, it signifies that an extensive level of agreement and cooperation exists between them,” he added.

Last month, Iran announced plans to conduct joint naval drills with Russian and Chinese military forces in international waters of the Indian Ocean and the Sea of Oman.

Speaking on Friday, however, Khanzadi did not mention whether the joint drills planned with Russia are part of the previously announced tripartite drills or not.

On Friday, an Iranian oil tanker was hit by two suspicions explosions near the Saudi port city of Jeddah, causing an oil spill that was stopped shortly after.

Tensions have been high in the region after a series of suspicious attacks took place targeting oil tankers crossing the Strait of Hormuz earlier this year.

The US, along with Saudi Arabia, quickly blamed Iran for the attacks, a claim firmly rejected by Tehran.

The attacks also came shortly after the US deployed a new naval group and a squadron of B-52 bombers to the region.

Washington has sought to use the tension to pressure Iran, calling for the formation of an international naval mission in the region.

Only Saudi Arabia, the United Arab Emirates, and the United Kingdom, have expressed willingness to join such a coalition.

Iran, in response, has presented the Hormuz Peace Endeavor (HOPE) to facilitate regional dialogue and cooperation without the need for any foreign military presence in the Persian Gulf region.